Since Specialised Expo 1991 Plovdiv, the State of Qatar has actively participated in World and Specialised Expos. It became a Member of the BIE in 1997. Its participation has been rewarded on several occasions, including a Bronze Award in its category at World Expo 2010 Shanghai, and a Gold Award at Specialised Expo 2017 Astana for the design of its presentation.

“New Energy Horizons” is the theme of Qatar’s pavilion at Expo 2017 Astana, reflecting the country’s ambition to minimise its carbon footprint while advancing its economy, driven by exports of oil and gas.

The pavilion welcomed visitors with animated wall displays depicting the country’s evolution over time, from its ancestral traditions to the discovery of the oil and gas, and the development of Qatar as a vibrant and modern economy. Qatar’s advancements in green technologies – notably solar power – were then showcased using a series of interactive video screens. 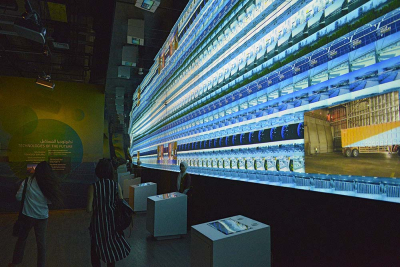 The spiral led to a circular hall of mirrors that introduced the concept of “Human Energy” and the four pillars of the Qatar National Vision 2030: human, social, economic, environmental. Combined with light effects and interactive screens, visitors were invited to contribute to a wish list for a greener planet. 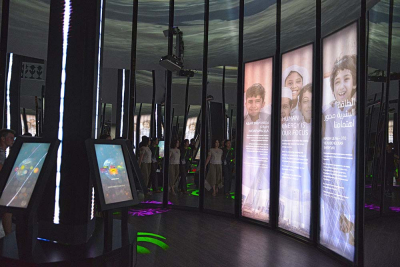 Engaging the youngest visitors, the pavilion also featured a children’s activity room with computer games and colouring books in line with the Future Energy theme.

Theme
A Country for which Water is the Essence