Following in the steps of Seville’s successful World Expo in 1992, the Spanish city of Zaragoza embarked on a project to organise a Specialised Expo as a way to boost investment and spur development, notably along the banks of the Ebro River. Reflecting the pressing issue of managing water resources and the city’s own experience at the confluence of two major river systems, the theme “Water & Sustainable Development” was selected as the theme of Expo 2008, which coincided with the bicentenary of the First Siege of Zaragoza.

Recognised by the 138rd session of the General Assembly of the BIE on 1 December 2005, Expo 2008 was the first Specialised Expo to take place since the BIE adopted new rules regulating this type of event, known officially as an ‘International Recognised Exhibition’. These rules stipulate that the Expo can last no longer than three months, with a maximum site area of 25 hectares, encouraging organisers to be efficient with their use of space for thematic and international pavilions.

Taking into account the rules of the BIE and the sustainable aspect of the theme, the Expo Masterplan respected the city’s urban planning needs and followed environmental sustainability criteria, privileging “green” over “concrete”. 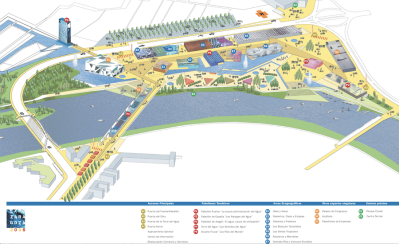 Situated on the banks of the Ebro, the Expo site was divided in eight sections according to eco-geographical characteristics – islands, rainforests, oasis, temperate forests, ice and snow, mountains, rivers and flat planes, and grasslands.  The site also featured a desert zone which used mirrors, projections and combinations of light and sound to form optical illusions.

Several architectural masterpieces were designed as integral parts of the Expo site. These include Zaha Hadid’s uniquely shaped Bridge Pavilion, which served as the main entrance to the Expo site from the city centre and as a thematic pavilion. Another thematic pavilion, the droplet-shaped Tower of Water by Enrique de Teresa, stands 76 metres high and remains a landmark in the city.

A Fountain of Discoveries

Throughout the site, in the thematic and international pavilions, visitors could learn about the challenges facing the planet and solutions for the future. Six thematic Plazas highlighted different topics touching on the Expo’s theme, with special installations dedicated to thirst, clean energy, river basin governance and urban water management, among others.

The River Aquarium – the largest freshwater aquarium in Europe – introduced visitors to the varied waterscapes of major waterways from across the world, featuring over 300 species from river ecosystems including the Nile, the Mekong, the Murray-Darling and the Ebro.

The relationship between water and sustainable energy was addressed in a fascinating way in “Oikos”, which showcased the potential of water, solar and wind as sustainable sources of power via “sunflower” solar panels, a wind-powered water pump and a hydroelectric demonstration of Archimedes’ screw.

A total of 104 countries participated in Expo 2008, and these were joined by all of Spain’s autonomous communities. In addition to independent pavilions, there were three regional pavilions from Sub-Saharan Africa, Latin America and the Caribbean. Various creative techniques were used to encourage visitors to engage with the theme, including a miniature boat tour in Germany’s pavilion, artificial “lakes” created by water falling from the ceiling in Switzerland’s pavilion, and a mini-spa from the Philippines. The diversity of the theme was interpreted in a range of ways based on each country’s experiences – Japan showcased its cultural traditions in relation to water, the Netherlands’ pavilion was centred around the importance of the dam, and visitors to Algeria’s pavilion could learn about the ancient “foggara” irrigation system as well as a modern-day project to transfer drinking water 750km across the Sahara Desert.

The Expo’s cultural and entertainment programme was notable for its broad choice of events and activities. American singer-songwriter Bob Dylan performed at the opening ceremony, while the closing ceremony was marked by an avant-garde performance by composer Philip Glass. Throughout the duration of the Expo, hundreds of thousands of visitors attended shows every week inspired by the theme of “Water and Sustainable Development.” Of the 3,400 cultural activities and spectacles on offer, the Cirque du Soleil’s daily “Awakening of the Serpent” procession and the climate change inspired “Iceberg” show proved particularly popular among visitors.

As well as being an entertainment venue, Expo 2008 served as an intellectual hub on sustainable water management, gathering minds from across the world via the Water Tribune. This unique platform allowed scientists, engineers, politicians, business representatives and researchers to exchange on issues relating to the theme. It served as an intellectual instrument, encouraging different stakeholders to propose and debate solutions to different challenges surrounding water management in the world.

The Water Tribune had a concrete outcome in the form of the Zaragoza Charter, which was drawn up to summarise the propositions and visions put forward during the Expo. Setting out clear recommendations for the sustainable management of water resources, the Charter indicates the way forward for policymakers and more generally all citizens of the world. After the Expo closed its gates, the Charter was presented to the Government of Spain, the Bureau International des Expositions (BIE) and the Secretary General of the United Nations.

After the Expo, Zaragoza became the first Spanish City to host the headquarters of a United Nations Agency; the United Nations International Decade for Action: Water for Life 2005-2015. In addition to the long-term impact of the Expo on the city and its population, this reinforced Zaragoza’s status as a reference point on matters of water and ecological development.

In terms of its wider impact on the city, Expo 2008 served as a catalyst for the transformation of the Ebro riverfront as well as a modernisation of the city centre. Zaragoza’s transport infrastructure was improved via modernised roads and new bridges, as well as a bike-hire scheme which was established in the run-up to the Expo and which remains in place today.