Japan was elected to host Expo 2005 during the 121st session of the BIE General Assembly on 17 June 1997, and the Expo was formally recognised by the BIE on 15 December 2000. Organised in Aichi Prefecture under the theme “Nature’s Wisdom”, the Expo took place between 25 March and 25 September 2005, gathering 22.05 million visitors, largely surpassing the 15 million expected visitors.

The theme of the Expo, “Nature’s Wisdom” was based on the 1997 Kyoto Protocol, aimed at reducing greenhouse gas emissions. “Nature’s Wisdom” also echoed and embodied the resolutions adopted by the BIE General Assembly in 1994, which codified the requirement that the theme of 21st century Expos reflect the “necessary protection of the natural environment”. The theme was separated into three subthemes:

An Expo site in the hills of Nagoya

The Expo site was initially set to be located within Kaisha forest in Seto municipality, but this option was abandoned due to the environmental impact the development of the Expo site would have, notably on local wildlife. The area that was finally selected for the Expo was a 173-hectare site in the eastern hills of Nagoya, split between Nagakute and Seto municipalities.

Conceived and built with respect for the “Nature’s Wisdom” theme and subject to a thorough environmental evaluation, the Expo site integrated existing forests and ponds, with the constructed area having minimal impact on the surroundings. Additionally, to reduce the environmental load on the ground and to help visitors move around on foot, a circular promenade known as the Global Loop was installed 14 metres above the ground, spanning 2.6km around the Nagakute site. 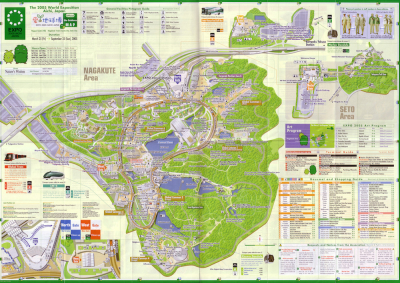 Innovations in favour of sustainable development

All construction and management operations on the Expo site were based on the 3Rs principle: Reduce, Reuse, and Recycle. A wide range of new technologies in favour of sustainable development were used, including a multimodal smart transport system and a hybrid bus connecting the Nagakute and Seto sites. From a gigantic laser projection screen to autonomous solar production systems, the different innovations presented at the Expo all aimed to improve quality of life while respecting the environment. Visitors could also meet a plethora of robots – speaking different languages, cleaning or monitoring the site, providing entertainment, keeping older people company, or playing music.

A total of 121 countries and four international organisations participated in Expo 2005, each presenting their own perspectives and interpretations of the theme.

The Nagakute site featured presentations of Japan’s role in promoting human development and new technologies, and housed pavilions of international participants in the six ‘Global Commons’. Corporate pavilions were also present in this zone, highlighting the most recent environmentally-friendly technologies that could contribute to improving quality of life.

The Seto site was dedicated to Satoyama culture, a traditional Japanese lifestyle that aims to be in harmony with nature. This zone symbolised the implementation of the “Nature’s Wisdom” theme, with pavilions focusing on the relationship and interaction between humankind and nature, as well as inter-human relations.

Several initiatives were launched in order to promote environmentally responsible behaviour among visitors and more generally among all citizens. In addition to Expo-led programmes, these initiatives were also supported by the participation of around 30 non-governmental organisations as well as 230 citizen groups.

On the site, thorough recycling systems were put in place, with waste separated into nine categories in order to maximise efficiency. Expo 2005 also supported eco-conscious behaviour through the launch of “Eco-Money”, a virtual currency system. Eco Money was aimed at developing a recycling-friendly society and preventing climate change by reducing the use of plastic bags and promoting public transport use. The currency system was linked with certain actions on and off the Expo site and allowed people to collect points in return for products, discounts, or the opportunity to participate in reforesting projects. The points were registered on chips integrated on Expo tickets and could be consulted on mobile phones and online.

To symbolically highlight the issue of climate change and to showcase the origins of the relationship between humankind and nature, Expo 2005 took part in a project to excavate a Siberian mammoth known as the Yukagir Mammoth. The mammoth’s head, front left leg and skeleton, as well as other discoveries from Siberia, were displayed in a refrigerated exhibition hall on the Expo site, next to the Global House.

The impact of the Expo on attitudes was significant: surveys carried out during the Expo indicated that visitor attitudes were markedly changed by their Expo visit. The proportion of those who said they actively try to save energy at home or at the workplace increased from 64.2% to 97.1% after visiting the Expo, and the proportion of those who actively aim to reuse or recycle goods increased from 80.1% to 97.5%.

Following the Expo, in July 2006, most of the Nagakute site was transformed into a wide parkland known as Moricoro Park (named after the Expo mascots, Morizo and Kikkoro). Access to the park continues to be assured via the LINIMO train, the world's first commercially operated Maglev system. The park includes Satsuki and Mei's house, the protagonists of the animated fantasy film My Neighbour Totoro. In 2019, an agreement was signed to establish the Ghibli Studios park on this site, set to open in 2022.

On the Seto site, the Aichi Kaisho Forest Center opened in the former Seto Pavilion in September 2006. The centre was established to preserve the Kaisho Forest and to create a communal space for knowledge-sharing. A museum dedicated to Expo 2005 Aichi, an indoor swimming pool and an ice rink were also opened in March 2007. 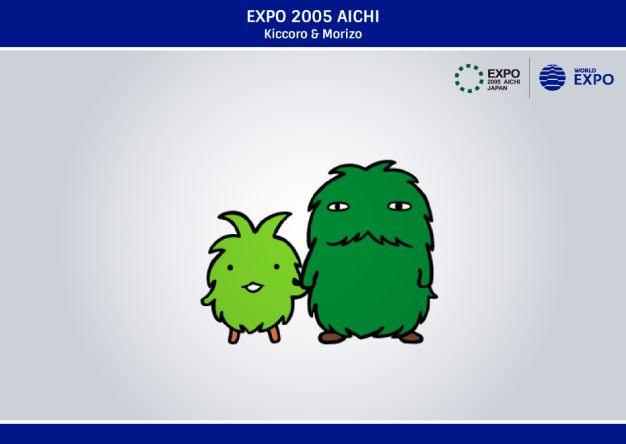 Kiccoro, the ‘Forest Child’ and Morizo, the ‘Forest Grandfather’, both spirits of the forest, were created to embody the theme of Expo 2005 Aichi – “Nature’s Wisdom”. Designed by Aranzi Aronzo, the names of the mascots were chosen out of 82,527 entries from the public.

Kiccoro is full of energy, vitality, and curiosity – seeking to become friends with any person, animal, or plant. Morizo is wise and kind, a master of the forest who can use his spiritual powers to deliver a breeze or sunrays to the hearts of tired people.

The mascots were also made into an animation, consisting of 26 five-minute programmes on NHK, Japan’s national broadcaster . The stories, which depicted the mascots’ interacting with nature’s beauty, preciousness, and wisdom, were created by well-known Japanese animation talents. Furthermore, to carry out the legacy of environmental consciousness of Expo 2005 Aichi as well as share the culture of Japan, the mascots have continued to promote environmental consciousness by making appearances at successive World and Specialised Expos.