The idea of the Republic of Kazakhstan hosting an Expo was first announced by President Nursultan Nazarbayev while visiting Specialised Expo 2008 in Zaragoza. With the young Republic having moved its capital city to Astana, the project to host Expo 2017 formed a key part of Kazakhstan’s long-term growth and development strategy.

The theme of the Expo, “Future Energy”, reflected Kazakhstan’s willingness to transition towards a green economy, to promote dialogue in favour of energy security on a global scale, and to contribute towards the development and use of alternative energy sources. The theme was thus split into the following three subthemes:

The site of Expo 2017 was developed on a 174-hectare zone in the capital’s left bank, located close to Nazarbayev University. The Master Plan of the Expo site was conceived by Adrian Smith + Gordon Gill Architecture, with a two-phased approach developed to transition the exhibition area into a new neighbourhood for the city following the Expo. The 25-hectare exhibition area was designed with the “Future Energy” theme in mind, with the orientation of buildings optimised to reduce energy consumption, to maximise the potential for energy generation, and to ensure maximum comfort all-year round. 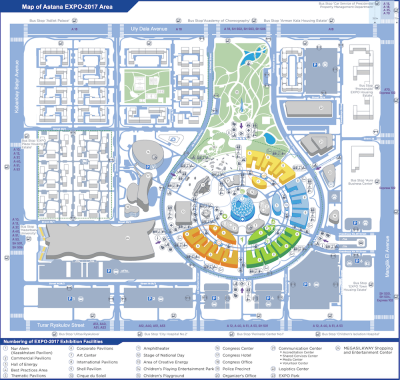 The Expo buildings were centred around Nur-Alem – an impressive glass-covered spherical building with a diameter of 80 metres, making it the largest spherical building in the world. Construction of the stunning landmark required 3,535 units of double-glazed windows, and it includes renewable generation capacity such as photovoltaic elements and two silent wind turbines, in line with the Expo theme. Emanating from the central sphere were Expo Theme Pavilions 1 and 2, the Energy Best Practices Area, corporate pavilions, and cultural venues, with the International Pavilions forming the outer ring of the exhibition area.

An exploration of the different types of energy

From the outdoor areas and evening performances to the content of pavilions, visitors of Expo 2017 were fully immersed in “Future Energy”. Nur-Alem was the most visited pavilion during the course of the Expo, offering a 360º energy experience. In addition to the Kazakhstan national display on the ground floor, the sphere housed the Museum of Future Energy, with six forms of energy generation (space, solar, wind, organic, kinetic and water) being presented in detail on each floor, including live shows and interactive exhibits. Offering unrivalled views across the capital city and Kazakh steppe, the top floor of the sphere showcased ‘the city of the future’, predicting how new technologies and smart grids will shape the future of Kazakhstan’s capital.

The theme pavilions also took visitors on an in-depth exploration of energy generation and use, combining the latest innovations with artistic displays to convey an optimistic message about “Future Energy”. In the Energy Best Practices Area, more than 20 innovative technologies projects and policies from around the world were showcased, offering real-life solutions in favour of sustainable energy management, including an off-grid method of supplying oxygen using solar power to treat pneumonia, and paving that generates electricity by using the kinetic energy of passers-by walking on it. Elsewhere on the Expo site, the focus on energy was the inspiration for unique art displays, dazzling light shows on the surface of Nur Alem, and a specially produced Cirque du Soleil production entitled REFLEKT, which was performed on the Expo site throughout the duration of the Expo.

Worldwide contributions to the energy mix

A total of 115 countries and 22 international organisations participated in Expo 2017 Astana, with each participant interpreting the “Future Energy” theme in a unique way. France’s pavilion offered some of the country’s own solutions to energy challenges, including the latest hybrid-electric vehicles and concrete that can be used in ‘green walls’ where plants can grow. In China’s pavilion, new technologies reducing energy use and the promise of nuclear fission power were showcased, as well as a captivating 3D animation highlighting the search for new forms of energy.

Many pavilions offered interactive experiences to immerse visitors in their chosen theme. Germany’s pavilion, for instance, encouraged adults and children alike to touch and play with the exhibits, including a swing that illustrates the generation of hydroelectricity. The Republic of Korea took visitors on a transformative journey, telling the story of the transition from fossil fuels to renewable energy through animations, a live dance show and augmented reality.

Creative pavilion designs were also cleverly used by country pavilions in their interpretation of the theme. The United Kingdom’s pavilion introduced visitors to its theme “We are energy” by means of a 60-metre panorama depicting a computer-generated landscape as well as a transparent yurt-inspired centrepiece that responded to human touch. Elsewhere, Qatar’s pavilion featured a circular hall of mirrors accompanied by light effects to draw attention to a ‘wish list’ for a greener planet, while Monaco’s pavilion addressed the issues of renewable energy and climate change through a mesmerising film sequence displayed on reflecting oscillating blades, reminiscent of the Mediterranean Sea.

A focal point for global discussions

A key aspect of Expo 2017 Astana was its diverse programme of events, forums and international summits, with a total of 3,500 such events taking place in the Expo’s three-month run. Such programming ranged from daily shows on the Expo site to high-level political summits: 28 heads of state, as well as over a hundred heads of government and ministers visited the Expo.

The headline series of the Expo was the Future Energy Forum, which gathered international scientists, scholars, and policymakers to contribute to in-depth discussions around the sustainable generation, storage, distribution and consumption of energy. Three such meetings were held in the run-up to the Expo, with 12 conferences organised during the Expo. The conclusions of the Future Energy Forum provided the basis for the Manifest of Values and Principles, a document that codifies the Expo’s intellectual legacy.

A new dynamism in the post-Expo phase

As an event of major importance for Kazakhstan and its capital, Expo 2017 Astana had a broad and lasting impact, both tangible and intangible. With the creation of a new railway station and airport terminal as well as the opening of dozens of new hotels and restaurants, the city’s capacity to welcome visitors grew significantly in the run-up to the Expo. Government actions implemented ahead of the Expo, including the ending of visa requirements for the citizens of almost 40 countries and the establishment of open-skies agreements allowing freer air travel have also contributed to the long-term growth of the nation.

In line with the Expo Master Plan, the Expo site was rapidly repurposed and integrated into the urban tissue of Astana. In Nur-Alem, the Museum of Future Energy continues to be a popular attraction, drawing over 300,000 visitors per year. As a unique place of gathering in the nation’s capital, the Expo site regularly hosts major events, concerts and celebrations throughout the year, including new year festivities, the Kazakhstan Energy Week and the Expo Summer Stage. The site also serves as a financial and business hub, hosting the Astana International Finance Centre, the Astana Hub International IT Park, the IT University, and the International Centre for Green Technologies and Investment Projects.

The message of “Future Energy” also lives on in the legacy phase. In addition to the adoption of the Manifest of Values and Principles, a global call to action for environmental issues, the Expo played an important role in supporting Kazakhstan’s own energy transition. A total of 133 innovative energy projects showcased at the Expo were implemented across Kazakhstan, with 16 of these being applied in the city of Astana. 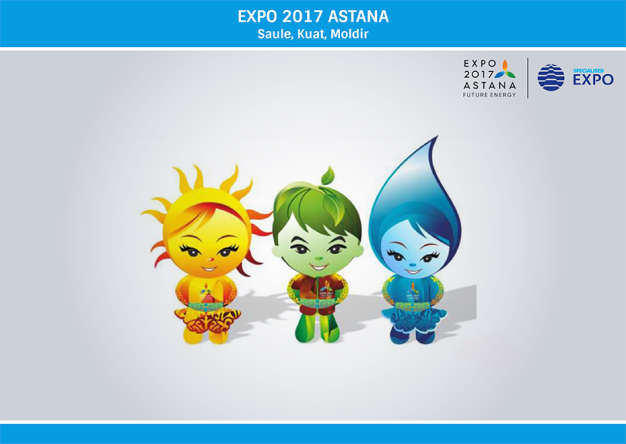 The three mascots of Expo 2017 Astana – Saule, Kuat and Moldir – represent the “Future Energy” theme of the Expo as well as its host country, Kazakhstan. Saule, meaning “sunshine” represents the energy of the sun, giving light and warmth to the planet. Kuat, meaning “strength” or “power” embodyies the power and beauty of nature, including green energy. Moldir, meaning “clarity” is a symbolises the energy of water as the main source of life. All three mascots reflect Kazakh culture in their style and bear the Expo’s logo on their chest.

The mascots were chosen through an international design competition design in which more than 80 works from around the world were submitted. A selection was made based on the alignment of the designs with the theme and vision of Expo 2017 – and the shortlist was presented for public voting. 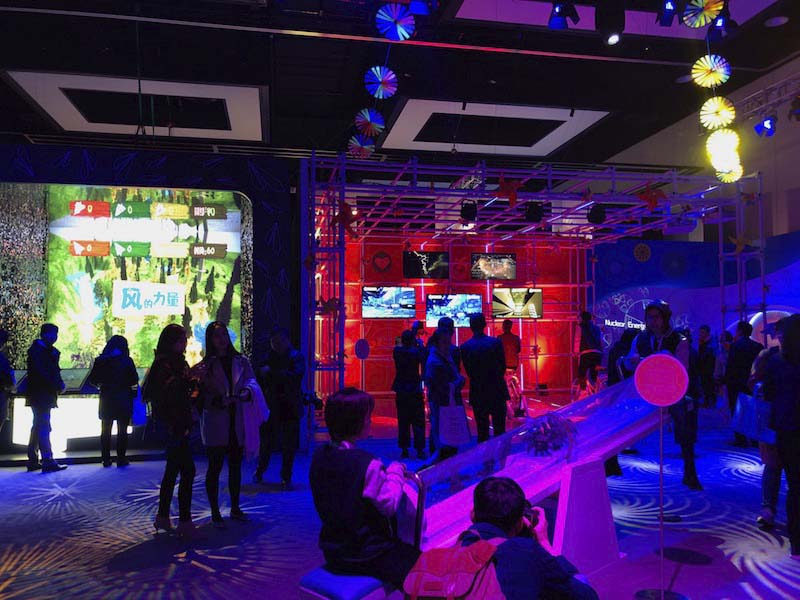 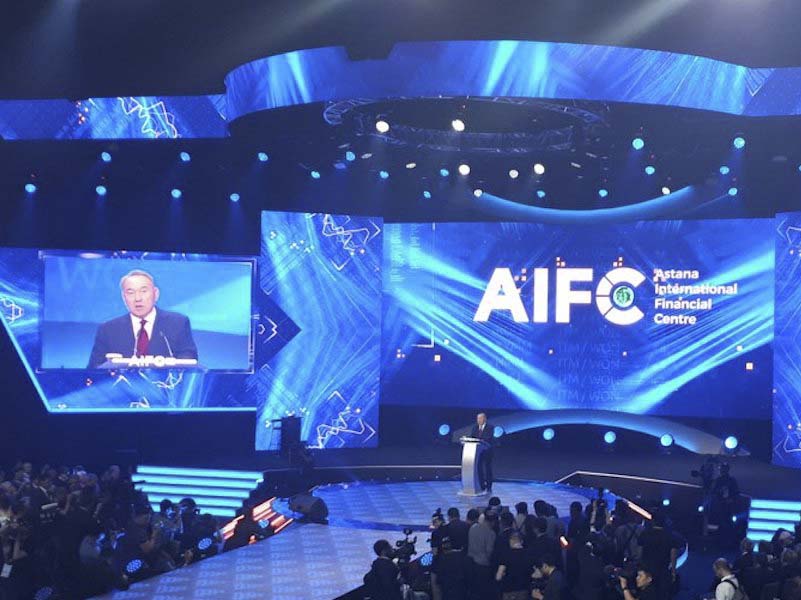 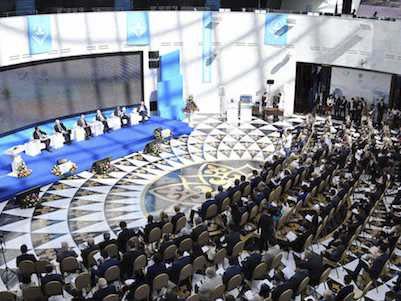 Expo 2017 Astana: “a lively page in the history of our country” 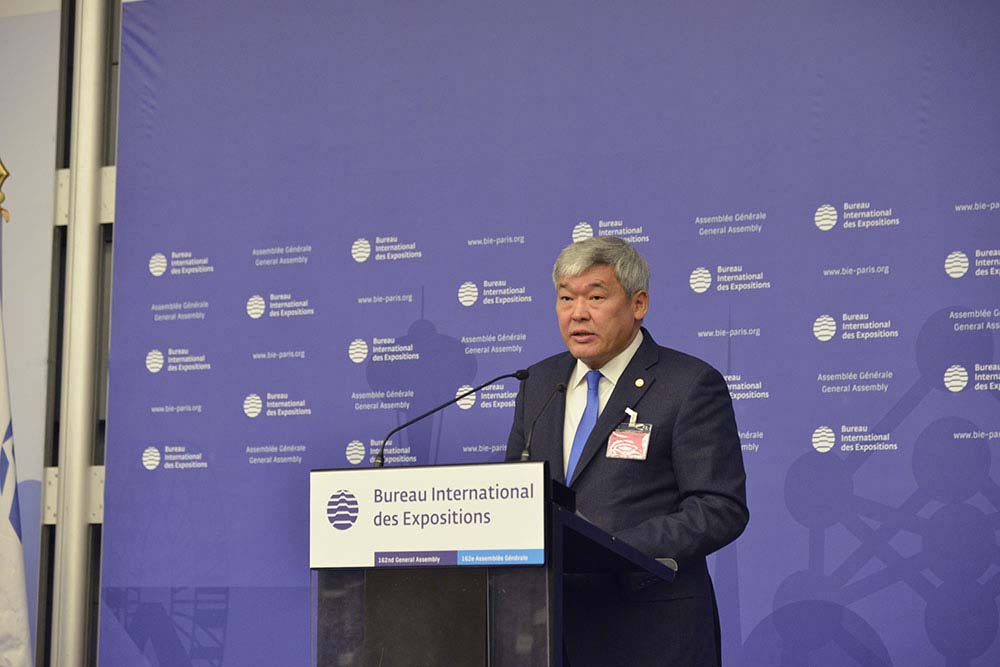 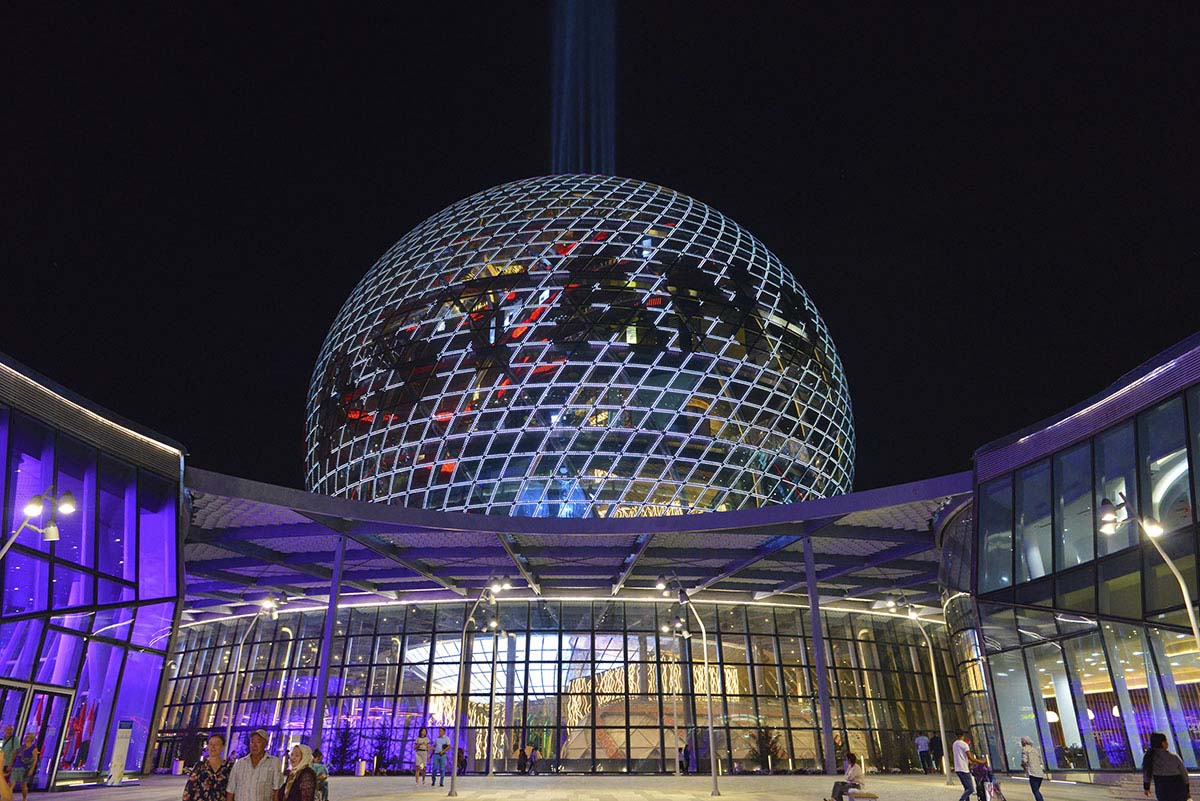 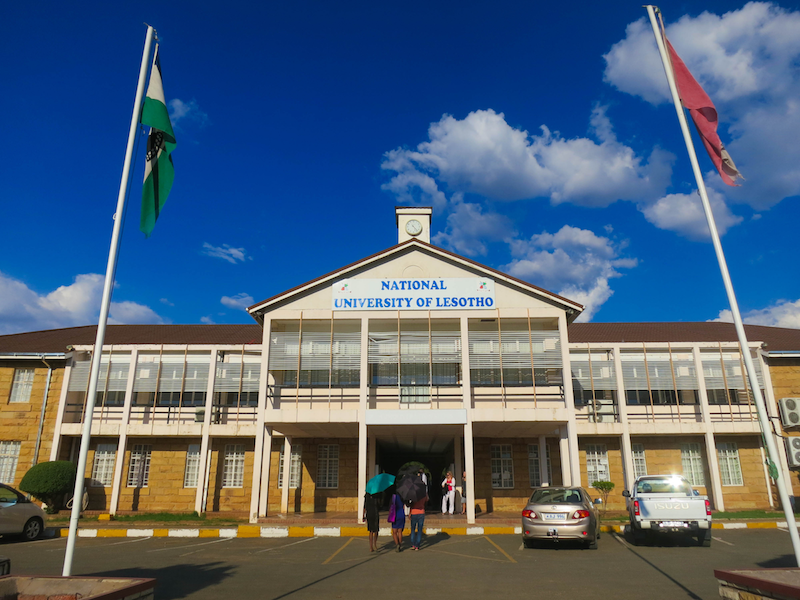 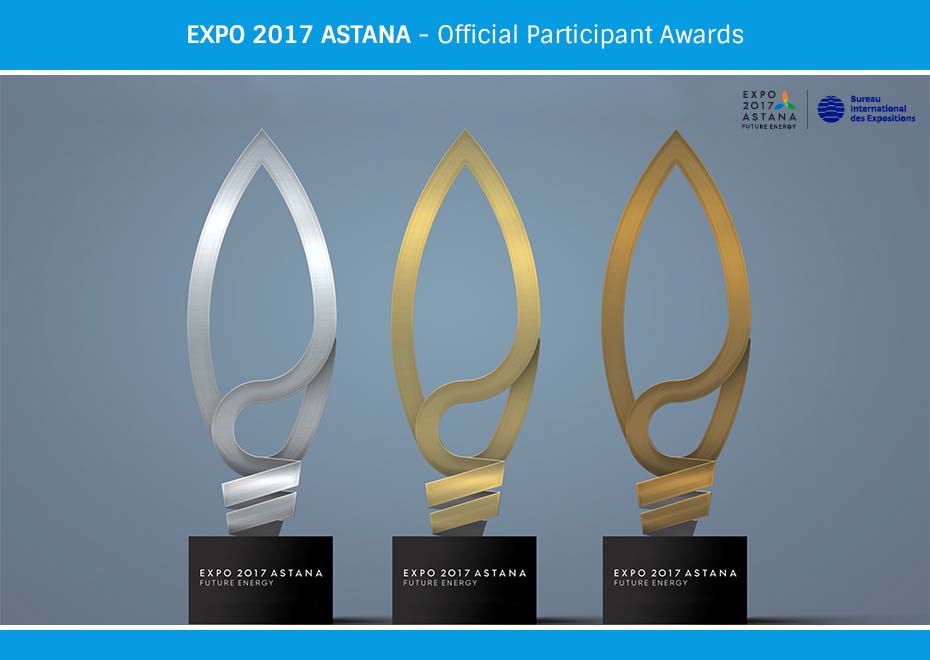 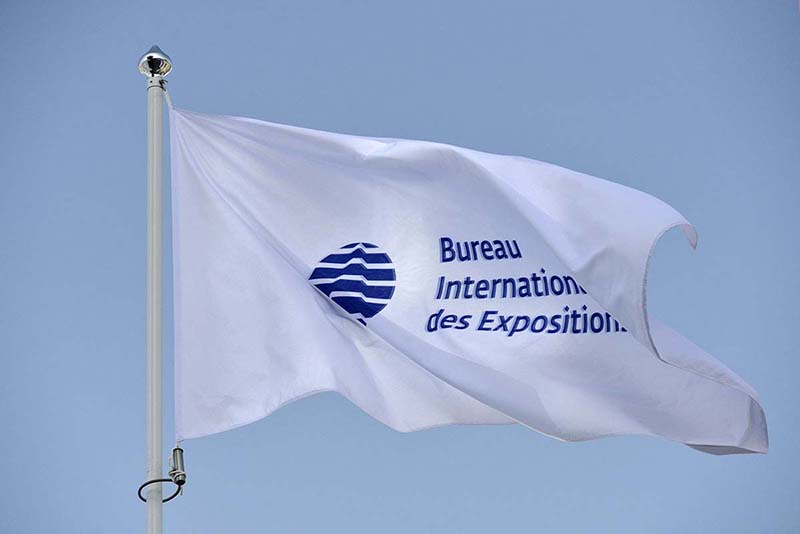