Feeding the Planet, Energy for Life

The Italian city of Milan hosted a World Expo in 2015, with the theme “Feeding the Planet, Energy for Life”. After Member States elected Italy as Expo 2015 host country on 31 March 2008, the 148th General Assembly of the BIE approved the registration of the Expo on 23 November 2010.

The Expo tackled one of the major challenges of the modern era, raising questions over food production, healthy eating, population growth, avoiding waste, and the efficient use of natural resources.

“Feeding the Planet, Energy for Life” was split into seven subthemes:

Located 15km north-west of Milan city centre, the 110ha Expo site was developed on a disused industrial and warehouse zone. Entirely surrounded by water and dotted with trees, the site was inspired by a typical Roman camp with two perpendicular axes; the 1.5km-long Decumano, and the 350-metre-long Cardo. The symbol of the Expo – the “Tree of Life” - was located at the far end of the Cardo, and was a source of entertainment with nightly light and sound shows. The wooden and steel structure, which stood 30 metres high, was inspired by the design of Michaleangelo’s Piazza del Campidoglio in Rome. 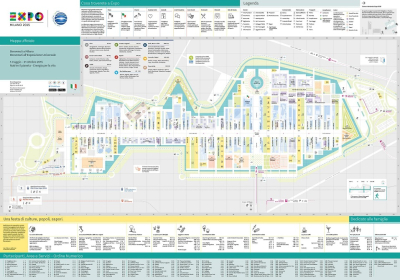 Theme pavilions gave visitors ample opportunity to delve into the theme and the seven subthemes. As thematic starting point for the Expo, the 7,500m2 Pavilion Zero, characterised by a tree growing through its roof, immersed visitors into the theme, featuring thought-provoking installations recounting the history of humankind’s relationship with food and life-size sculptures of livestock and architectural tools. The Future Food District gave visitors a glimpse of the future, including an interactive supermarket and a kitchen pavilion where chefs experimented with novel ways of preparing food.

The theme was present throughout the site and for all ages of visitors: the 14,000m2 Parco Biodiversita offered a relaxing walk through gardens and greenhouses, while the Children’s Park allowed younger visitors to learn about food in a playful way. Additionally, the relationship between food and art since 1851, the date of the first World Expo, was highlighted in the “Arts and Food” exhibition at the Triennale di Milano.

Through their pavilion design and content, 139 international participants addressed the Expo’s sustainable food theme in a range of different ways. Several dozen countries opted to participate via “Clusters” based on agricultural speciality or climate type, presenting specific challenges and innovative solutions within the specific domain. Six of the Clusters were based on agricultural speciality – Rice, Cocoa and Chocolate, Coffee, Fruit and Legumes, Spices, and Cereals and Tubers, while three were based on climate type - Arid Zones, Bio-Mediterraneum, and Islands, Sea and Food.

Among the 54 self-built pavilions, the Expo’s theme was addressed in several distinctive and innovative ways. The notion of food scarcity was tackled via an installation in Switzerland’s pavilion, encouraging visitors to take free samples of food, but warning them that stocks would not be replenished for future visitors. The central importance of bee pollination in food production across the world was highlighted in the UK’s Pavilion 17-metre high aluminium lattice ‘Hive’, while the natural evapotranspiration of plants was put to good use in Austria’s pavilion, which recreated a woodland microclimate to cool the immediate area.

The pavilion of Kazakhstan, with its 15 rotunda, was also a favourite, offering visitors a preview of Expo 2017 in Astana while highlighting the country’s ecological challenges and opportunities through interactive exhibits. Meanwhile, the pavilion of the UAE – host country of the next World Expo in Dubai – presented a pavilion designed by Norman Foster, which evoked the country’s landscape and demonstrated the use of sustainable passive design.

In terms of the theme, the Expo led to the creation of the Milan Charter, which sets out principles and objectives regarding nutrition, sustainability and the universal right to food. Proposed by the Italian Government in partnership with civil society actors, the Charter was handed to UN Secretary General Ban Ki-moon on 16 October 2015. Additionally, the Milan Urban Food Policy Pact was signed by mayors of over 100 cities from across the world. The Pact, supported by the FAO, calls on cities to develop sustainable and healthy food systems while promoting biodiversity and reducing waste.

Following the closing of the Expo, the site is being redeveloped to host an innovative park dedicated to science and technology that is to be fully operational in 2024. In addition to a “Human Technopolis”, the area will be home to the University of Milan’s science faculty, Italy’s first dedicated road for driverless cars, as well as offices and cultural venues.

Foody, the mascot of World Expo 2015, was created to embody the Expo theme – “Feeding the Planet, Energy for Life” in an original and positive way.

Inspired by the works of Italian painter Giuseppe Arcimboldo, Foody conveys the Expo’s theme with optimism, originality and sensitivity, with his personality marked by wisdom, respect, and an appreciation for healthy food.

He represents community, diversity and food in the broadest sense of the term: food as a source of life and energy. This is why he is composed of 11 elements, each having their own distinctive personalities: Guaglio, the garlic - Arabella, the orange - Josephine, the banana - Gury, the watermelon - Pomina, the apple - Max Maize, the blue corn - Manghy, the mango - Rodolfo, the fig - Piera, the pear - Rap Brothers, the radishes – and Chicca, the pomegranate. Each of Foody’s composite characters has a different personality, but come together to make a unified and happy family, illustrating the ideal synergy between countries from around the world, called on to respond global food challenges in an energetic and positive way.