The first World Expo in China was registered by the 138th General Assembly of the BIE on 1 December 2005. Taking place between 1 May and 31 October 2010, the Expo was organised under the theme of “Better City, Better Life”, in a city renowned for its growth, its bold projects, and its unique way of life: Shanghai. In 2010, more than one in two people were living in a city, raising questions over social mixing, sustainability, security, hygiene and mobility. With an urban population of 23 million, Shanghai was considered ideal location to showcase solutions to these pressing issues, and the People’s Republic of China was duly elected host country of World Expo 2010 during the BIE’s 132nd General Assembly in December 2002.

Transforming the banks of the Huangpu River

With the largest site in the history of World Expos – 523 hectares – Chinese authorities embarked on a major operation to redevelop the area between the Nanpu and Lupu bridges in the centre of Shanghai, on both sides of the Huangpu River. Much of the site was previously occupied by shipyards and ageing factories, with the Expo creating a new district that would be fully integrated into urban life. In the spirit of sustainable urban development, a number of existing buildings were repurposed, including a former steel mill that became a sculpture garden and the Nanshi Power Plant, which was redeveloped as a theme pavilion and has since become China’s first public museum of contemporary art, the “Power Station of Art.” A comprehensive system of shuttle buses, boats and metro lines allowed visitors to easily move around the site and cross between the Puxi and Pudong sides. 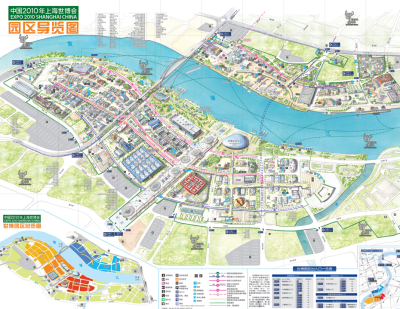 In addition to its size, Expo 2010 also broke records for international participation and visitor numbers. A total of 246 countries and international organisations took part in the Expo, with pavilions separated into zones within the vast site according to region. Throughout its six month duration, over 73 million visitors passed through the gates of the Expo, breaking the previous record held by Expo 1970 Osaka and its 64 million visitors. The highest ever daily attendance of an Expo was recorded on 16 October, when 1.03 million visitors flocked to the site.

Reflecting the magnitude of the event as a whole, China’s pavilion – “Oriental Crown” – stands 69 metres tall with a total surface of 160,000m2. Based on traditional Chinese structure of dougong (wooden crossbeams), the bright red pavilion was designed by He Jingtang, who sought to show the spirit of Chinese people against the backdrop of a rising nation. The pavilion was one of the few Expo structures designed to be permanent, and it remains open as the China Art Museum, displaying contemporary works of art.

Sustainability was at the core of the low-carbon Expo site, which was designed to be environmentally innovative, featuring rainwater collectors and solar panels. The theme was also expressed through international participation - 79 countries designed and built their own pavilions at Expo 2010, with the others customising pavilion space within regional clusters. All participant countries – whether urbanised or urbanising – encapsulated “Better City, Better Life” in a multitude of creative and practical ways. The Urban Best Practices Area (UbpA) was a major innovative feature of the Expo, allowing cities to participate and showcase their own solutions and responses to urban challenges. A total of 80 examples were showcased within this zone, which formed a “city of the future” through innovative city models and examples of universally applicable solutions that served to provide inspiration for urban development across the world.

“Better City, Better Life” was explored and debated in a series of forums, seminars and round-tables that took place before and during the Expo, culminating in the Shanghai Declaration that was jointly issued by all participants on 31 October, the day of the closing ceremony. The Declaration laid out a roadmap for sustainable urban development and proposed the creation of the World Cities Day, to be celebrated annually on 31 October. Member States of the BIE approved the Shanghai Declaration in 2012, and a year later the UN General Assembly adopted World Cities Day, which has been celebrated annually since 2014.

The Expo’s thematic legacy is also encapsulated in the Shanghai Manual, a practical guide for sustainable urban development in the 21st century. Drawing on lessons and outcomes from real life case studies, the manual was jointly compiled by the United Nations, the Ministry of Housing and Urban-Rural Development of China, the Shanghai Municipal Government and the Bureau International des Expositions (BIE). It continues to serve as a guide for city managers, having been updated for a second version in 2016.

Expo 2010 was a massive opportunity for urban development and regeneration, leading to large scale investment in Shanghai’s infrastructure in the build up to the Expo. This translated into a legacy which included a new runway and terminal at Hongqiao Airport, a high-speed rail connection to Hangzhou, the longest metro system in the world, and the redevelopment of the Bund promenade.

The repurposing of the Expo site was central to the Expo 2010 project, giving the city of Shanghai a unique opportunity to fully redevelop a large swathe of the city centre and riverfront. In addition to the China Art Museum, the former site now hosts the newly built World Expo Museum, an international museum dedicated to the history of Expos that opened to the public in May 2017. The World Expo Cultural Centre was immediately transformed into the Mercedes-Benz Arena, providing Shanghai with a world-class cultural venue with a capacity of 18,000. Furthermore, a 2km2 area of the site is being transformed into the “Expo Culture Park”, featuring an Opera House and integrating the pavilions built by France, Russia, Luxembourg and Italy. 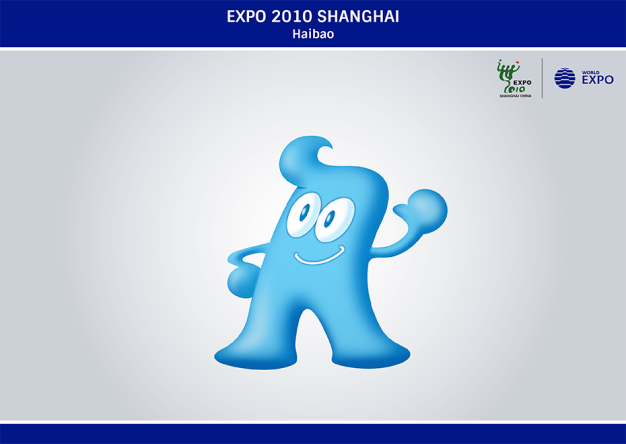 Inspired by the shape of the Chinese character ‘人’ meaning ‘person’, Haibao represents the central place of humans in the theme of Expo 2010 – “Better City, Better Life”. Haibao’s big round eyes symbolise hope in the future, notably in the quality of life in cities. The mascot’s blue colour reflects hospitality and imagination, evoking the sea, future and technology.