Theme
The living ocean and coast

Expo 2012: A Global Dialogue on the Common Destiny of the Ocean and Man

Expo 2012 Yeosu, recognised by the 144th session of the BIE General Assembly on 2 December 2008, was dedicated to the theme "The Living Ocean and Coast: Diversity of Resources and Sustainable Activities". It addressed the role of the ocean and coasts as a source of life and a regulator of the ecosystem. Together, ocean and coasts form a network that controls the global environment and whose singular influence on the health of the planet is a testimony to the common destiny of all people and nations around the world. But today, these two key ecosystem actors are increasingly in danger: continuous coastal developments, overexploitation of marine resources, and pollution have put enormous pressures on the fragile balance that governs their well-being.

Against this backdrop, Expo Yeosu 2012 laid out a roadmap for development that could best respond to the needs of the 21st century. Today, sustainable development of the sea is not a choice but a necessity, as the survival of humanity is closely connected to the health of the ocean and coasts. 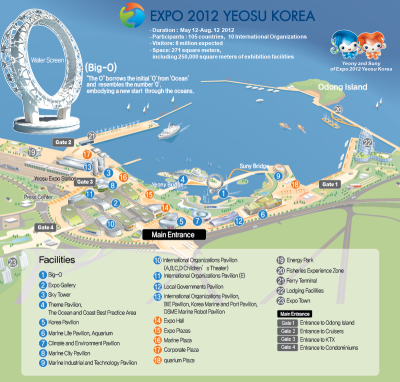 Located on the southern coast of the Korean peninsula, the city had been a historical hub of maritime transport, linking China, the Korean peninsula, and Japan. Yeosu is one of the leading industrial cities on the nation's southern coast. The diversity of marine life species found in the East Asian region is said to be one of the greatest in the world.

The Living Ocean and Coast

With its theme, Expo 2012 Yeosu has given momentum to a renewed international framework of action to combat climate change and promote responsible and sustainable development, so that a healthy, living ocean and coast may be preserved.

The ocean and coasts have always played an integral part for life on Earth as well as for human civilisation – indeed, their presence, influence, and even control over human activities are ubiquitous and indispensable.

However, centuries of human activities – which some may call abuse – have taken their toll. From overfishing and other damaging methods of fishing to industrial pollution and reckless development, the ocean and coasts have suffered from human exploitation.

Moreover, the degradation of the marine and coastal environment must be treated with immediate and urgent care because it takes place in the wider context of a rapidly deteriorating planet and damaged ecosystems in general, which have far-reaching implications for our ability to meet international development goals. The deterioration of ecosystems and the corrosion of the marine and coastal environment represent a global emergency situation, with broad implications for all of humanity that require significant and bold measures.

Indeed, the issue of marine and coastal preservation is a critical question of historic importance, and the whole of the international community must come together in order to build consensus on the actions to be taken. This was at the heart of Expo Yeosu 2012's message to the world.

To adress this issue, Expo 2012 chose to focus on three main subthemes:

Expo Yesu 2012, together with an international drafting and review committee of experts in the field of oceans and marine sustainability drafted the Yeosu Declaration to promote the importance of sustaining our oceans and coasts. The Yeosu Declaration has provided the world with a new vision of "green growth from the sea," calling for all governments and civil society to work together in achieving their common goals for the ocean.