The Bureau International des Expositions (BIE) held its 171st General Assembly in Paris on 28-29 November 2022. Delegates representing the 170 Member States of the BIE attended the meeting, which included Expo reports and presentations from Candidates for Specialised Expo 2027/28 and World Expo 2030.

Organisers of World Expo 2025 Osaka Kansai presented Member States with an update on the progress made so far as well as planned content and exhibits. The Commissioner General of the Expo, Ambassador Koji Haneda, indicated that 142 countries have so far confirmed their participation in the next World Expo, adding that ten countries have signed their participation contracts. He noted that the first International Participants Meeting (IPM), held in October 2022, was a valuable opportunity to learn and exchange with participants. Delegates were then informed by the Vice Secretary General of the Japan Association for the 2025 World Exposition, Manatsu Ichinoki, about Expo initiatives, including the announcement of the first Future Society Showcase projects, which include a programme for electric buses at the Expo, a ‘Digital Expo’ assistant and a Virtual Expo. He also offered an overview of the ways the Expo is being promoted inside and outside of Japan, including the recognisable mascot Myaku-Myaku and the official theme song, ‘Kono Hoshi no Tsuzuki wo’ by male duo Kobukuro. 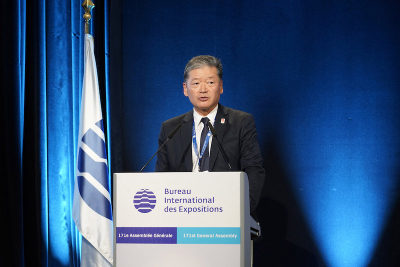 For the following World Expo, with the World Expo 2030 Candidates having submitted their candidature dossiers to the BIE on 7 September, delegations from Ukraine (for Odesa), Saudi Arabia (for Riyadh), the Republic of Korea (for Busan) and Italy (for Rome), presented their projects to BIE Member States, ahead of the organisation of Enquiry Missions to be held in early 2023. More to follow

Based on the recommendation of the Executive Committee of the BIE, the General Assembly gave its approval for all five candidates for Specialised Expo 2027/28 to be put forward for election in June 2023. This decision, which was based on the reports of the Enquiry Missions to each candidate country, was followed by presentations by delegations from Serbia (for Belgrade), Spain (for Malaga), Argentina (for Bariloche), the United States (for Minnesota), and Thailand (for Phuket). More to follow

With regard to Horticultural Expos, the final report of Floriade Expo 2022 Amsterdam-Almere was delivered to the General Assembly by the CEO of the Expo Organiser, Hans Bakker. Having closed to the public on 9 October, the Horticultural Expo hosted 32 international participants during its six-month run, during which it hosted hundreds of cultural activities and welcomed 685,189 visitors, who came from over 96 countries. Delegates were told of the importance of the Expo’s physical and intangible legacy, including the development of the Hortus neighbourhood, and the infrastructure that it will leave behind in Almere such as the circular bridges. Mr. Bakker also provided the General Assembly with key insights and takeaways based on the experience of Floriade Expo 2022 and holding such an event shortly after the lifting of Covid restrictions. 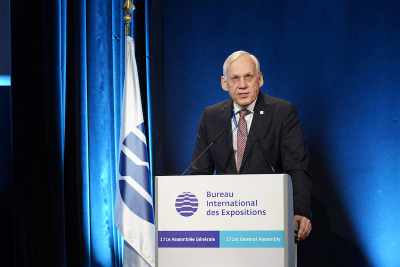 Looking to the next Horticultural Expo, Member States were informed about the progress of Expo 2023 Doha, which will open its gates on 2 October 2023 under the theme “Green Desert, Better Environment”. Addressing the meeting via video, the Commissioner-General of the Expo H.E. Bader Al Dafa encouraged all BIE Member States to participate in the Expo to share their expertise and solutions, noting that so far, 26 countries have confirmed their participation. Providing futher details on the Expo’s progress, the Secretary General of the Expo, Mohammed Ali AlKhoori indicated that almost all infrastructure work is completed, and that World Cup fans can currently engage with the Horticultural Expo and its theme at the dedicated ‘Green Fan Zone’ situated on the future Expo site. He also provided information on the Expo’s planned legacy, noting that the Museum of Biodiversity, the Innovation Center and Expo House will all have a new purpose after the Expo closes. 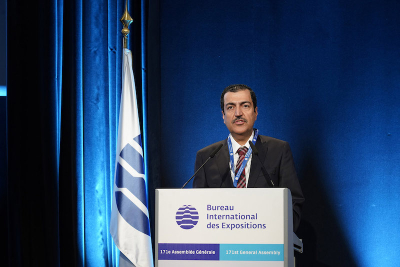 Following the General Assembly’s official recognition of Horticultural Expo 2027 Yokohama, the flag of the BIE and Expos was symbolically handed over to Japan’s Vice Minister of Land, Infrastructure, Transport and Tourism, Yoshiyuki Hayashi. Addressing Delegates via video message, the Minister of Land, Infrastructure, Transport and Tourism, Tetsuo Saito, and the Mayor of Yokohama, Takeharu Yamanaka, thanked the BIE for granting recognition and expressed their dedication to organising a successful event. The Secretary General of the Expo, Masato Komura, introduced the theme of the Expo “Scenery of the Future for Happiness”, and explained that the Expo site will be developed with green infrastructure and will reaffirm the importance of biodiversity. 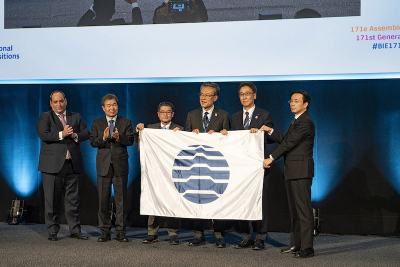 With the 23rd International Exhibition of Triennale Milano closing to the public on 11 December, the General Assembly was given an overview of the exhibition’s activities and impact thus far. The Director of the Museo del Design Italiano, Marco Sammicheli, offered an overview of the event’s three-day opening programme which gathered key protagonists, diplomats, and journalists across a series of inaugural activities. He indicated that the theme, “Unknown Unknowns. An Introduction to Mysteries”, is giving way to numerous research projects, including those with the 23 international participants taking part in the 23rd International Exhibition. He further noted that the contents of the exhibits and associated projects are included in the official catalog, “Unknown Unknowns”, whose second volume was released on 18 November. 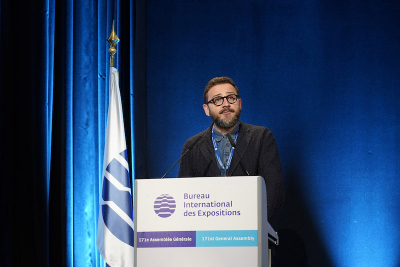