Expo 2017 Astana is officially open following a spectacular inaugural ceremony in Kazakhstan’s capital. Over 130 international participants are gathered for Expo 2017, which will take place over the next three months under the theme “Future Energy”.

In line with the Expo’s theme, a dazzling spectacle inspired by the history of energy embarked attendees on a journey from the beginning of the universe to the modern day using the latest scenographic techniques. Following a multimedia show featuring a “ballet of drones” in the Expo’s Congress Center, guests were treated to a concert in the Amphitheater, a light and laser show on Nur Alem -Kazakhstan’s immense sphere-shaped national pavilion-, and a scintillating fireworks display.

The Expo was declared open in a speech delivered by Nursultan Nazarbayev, the President of the Republic of Kazakhstan. In his inaugural speech, President Nazarbayev declared that "for several months, the most advanced technologies in the field of clean energy will be showcased here. And I hope that the results of the Astana Expo 2017 will bring tangible benefits to all."

Over 20 foreign heads of state and government, as well as ministers, ambassadors and national commissioners were among the dignitaries present for the occasion, which included the raising of the flags of all participant countries. 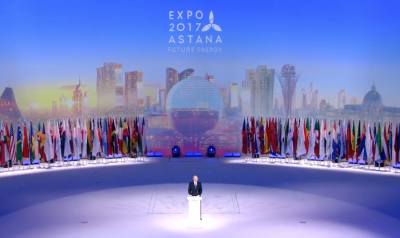 During the ceremony, the President of the General Assembly of the BIE, Steen Christensen, told the audience: “On behalf of the 170 Member States of the Bureau International des Expositions and its Secretariat, I would like to wish great success to the organisers and participants in Expo 2017 Astana.”

Expo 2017 Astana opens its gates to the public tomorrow, 10 June, and is expected to receive 5 million visits during its 93-day duration. Over 3,000 thematic and cultural events will take place within the framework of the Expo, including national days, themed seminars and performances. The Future Energy Forum, the Expo’s key intellectual feature, will host debates, workshops, panels and thematic weeks following its launch on 29 June.