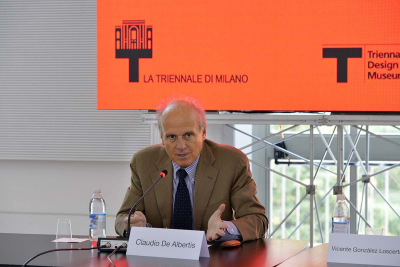 It is with great sadness that the Bureau International des Expositions (BIE) has learnt of the death of Claudio De Albertis at the age of 66, following a long illness. As the President of the Triennale di Milano Foundation, his vision and energy were instrumental in the renaissance of La Triennale institution and exhibition, and in the cultural influence of Milan.

Having started his career in the family construction firm, Claudio De Albertis’ early projects led him to develop a profound belief in the importance of rethinking urban landscapes on a human scale, and embracing changes sweeping the world of architecture and design. From the 1980s, he actively took part in social and cultural projects, and was selected by his peers to occupy leading positions in construction, architectural and trade associations. In his various positions, De Albertis promoted innovation and bold projects, including the successful bid to organise a World Expo in Milan in 2015.

In 2011, De Albertis was appointed President of the Triennale di Milano, a unique cultural organisation dedicated to exhibitions and events in the field of architecture, design and crafts. During his tenure, he reinforced the institution’s role, led the renovation of the Palazzo dell’Arte, and orchestrated the return of the Triennale di Milano international exhibition after a 20-year hiatus.

XX1T, the 21st edition of the Triennale di Milano, which was successfully held between April and September this year, reflected De Albertis’ forward-looking approach. By expanding the list of participants, the exhibition allowed developing countries and new types of actors to gain access to the international stage. By moving beyond the Palazzo dell’Arte to other venues in the Milan area, the Triennale brought, in his own words, “a new approach to a fast-changing and expanding urban space, breaking down the separation between centre and suburbs, and forming a metaphor for a dialogue between countries far from each other.”

De Albertis leaves an incomparable legacy of accomplishment and honesty that has enhanced the reputation of the institution and brilliantly served its international public. The return of the Triennale was made possible due to his commitment, and enduring belief in the exhibition as a driving force behind design.

Claudio De Albertis will be deeply missed by Milan, by the world of architecture and design, and by all BIE members and staff. At this difficult time, we extend our warmest thoughts to his family and friends, and to his colleagues at the Triennale di Milano.