Malaysia: The confluence of heritage, diversity and progress

Malaysia: The confluence of heritage, diversity and progress

In a fiercely competitive global marketplace, a nation’s brand image can be one of its highly valued assets or a devitalising disadvantage. How quickly a country is able to find a niche and succinctly position its brand compellingly to a global audience can have a weighing impact on its overall success and future sustainability. Given the rapidly evolving global landscape propelled by technological advancement and changing societal values, Malaysia has proven to be not just an adaptable but also a dynamic player, learning and growing from its engagement with the rest of the world to build its central identity premised on a powerful confluence of heritage, diversity and progress.

What Malaysia stands for

Malaysia epitomises an exceptional blend of modernity with heritage, unity with diversity, and tradition with progress, to build on its collaborations and commitment to stay ahead of the growth curve. These qualities have gone into establishing a well-rounded, integrated and strong brand Malaysia. 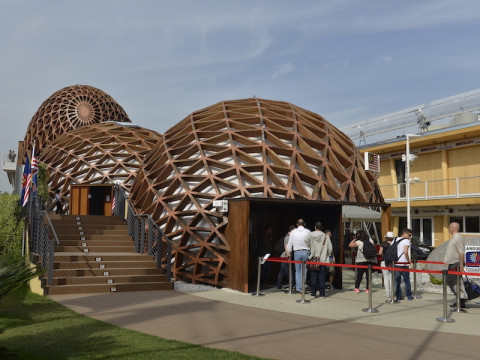 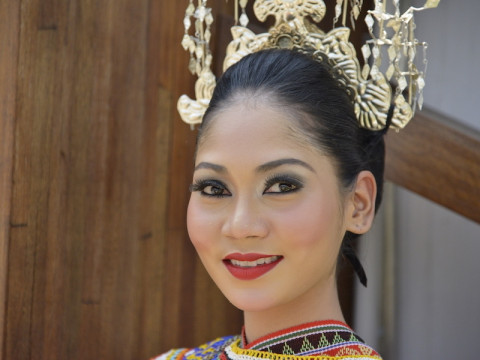 With an ever-increasing number of participating countries and visitors, World Expos are ideal platforms to showcase the country’s achievements and aspirations to an audience that shapes opinions and decisions globally. The stated objective of these Expos is to be a platform for the discussion of global challenges; however, over the 50 years that Malaysia has participated in these World Expos, we have observed that the events also provide an opportunity to showcase pride in our national heritage and innovative achievements.

As such, for Malaysia, World Expos offer an indisputable platform to leverage off, both in terms of the exposure to the country as well as to learn from the achievements of all the other participating countries. Moreover, the friendly competitiveness among participating countries serves as an impetus for us to continually evolve and improve how we represent our nation within the dynamic narratives set by the Bureau International des Expositions (BIE).

World Expos have thus become the staple for Malaysia, capturing the essence of what the country is, what it stands for and what it has to offer to the world.

Over the last 50 years, since our very first participation at a World Expo, the spirit of the organisers, the spectra of the pavilions and the vibrancy of the participants have helped advance the investment and trade prospects that Malaysia has to offer.

While the Sultanate of Johor (now one of Malaysia’s 14 states) participated in the World’s Columbian Exposition in Chicago in 1893, the unified country of Malaysia, in its current form, which was established on 16 September 1963, participated for the first time in an international exhibition at World Expo 1970 in Osaka.

Here, the Malaysian pavilion was based on the architecture of traditional Malay homes and built entirely with indigenously sourced high quality wood. The pavilion roof had three symbolic structures in the style of "Minangkabau" houses popular in the southern region of the peninsula. The building stood on stilts, with the interiors embellished with a generous use of woodcarving, complex hand-painted batik and rattan panelling. The first pavilion thus represented the art, culture and history of different races of the country in a unifying Malaysian context. 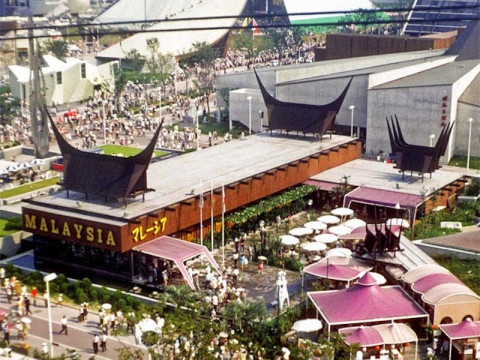 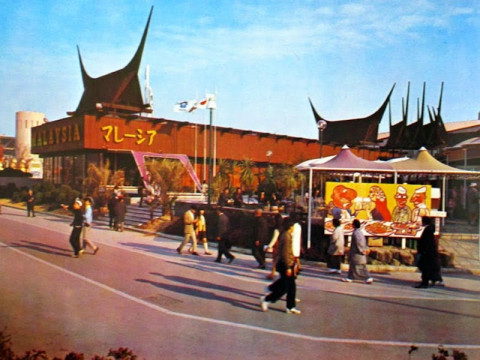 Having witnessed the benefits of participating in World Expos and to play a more active role in their planning, Malaysia became a member of the BIE in 1995, giving it a vote in the BIE General Assembly and the opportunity to participate in discussions about upcoming Expos.

Malaysia put itself in front of a global audience at subsequent World and Specialised Expos, and was awarded the Bronze Award in its category for the content of its pavilion at World Expo 2005 in Aichi.

At the most recent World Expo, the Malaysian pavilion’s theme, “Towards a Sustainable Food Ecosystem”, highlighted Malaysia’s transformation agenda of sustainability and inclusiveness, in line with Expo 2015 Milan’s theme, “Feeding the Planet, Energy for Life”, which called for the world to rethink the way food is produced, recreate healthier and sustainable farming, as well as food production for the benefit of mankind.

In terms of impact, the pavilion featured 183 Malaysian companies, with keen interest in palm oil from several interested participants. The pavilion also hosted a total of 3.1 million visitors, which was almost double the targeted numbers, making it a beehive of business interactions and cultural activities.

A study by Italian newspaper Corriere della Sera indicated that Malaysia was voted the third most preferred pavilion by Expo visitors and that Malaysian cuisine was highly rated. Overall, Malaysia’s representation at Expo 2015 Milan was an exemplary success in terms of increased long-term interest in trade and investments.

In keeping with the spirit of showcasing its prowess at international platforms and learning from global leaders in various fields, Malaysia also participated in Specialised Expos from time to time with the latest one being Expo 2017 Astana in Kazakhstan, focusing on “Future Energy”. 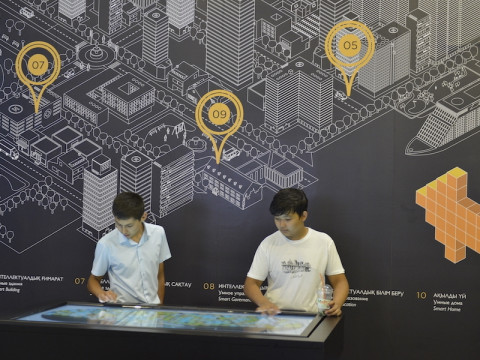 The interior of Malaysia's pavilion at Expo 2017 Astana 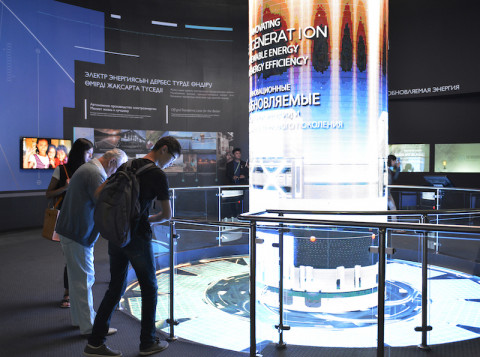 The interior of Malaysia's pavilion at Expo 2017 Astana

As part of the Expo’s comprehensive three-month programme, Malaysia launched Sustainable Cities Week, involving a series of thought provoking talks and insightful panel discussions from industry leaders on the different aspects of city planning and development.

Additionally, the popularity of the Malaysia pavilion resulted in it being named among the top most visited pavilions. The pavilion played host to heads of states and dignitaries from several countries including the United States, France, Switzerland, Germany, China, Japan, Singapore, Thailand, India, Venezuela and Monaco, to name just a few. 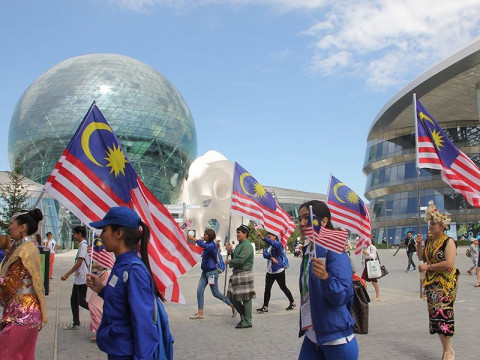 The National Day of Malaysia during Expo 2017 Astana 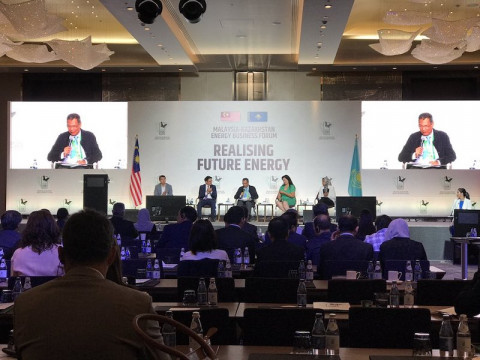 Conceptually, the #MyButterflyEffect inspired a green future for Malaysia and the world, with the iconic Rajah Brooke’s birdwing (Trogonoptera brookiana), Malaysia’s national butterfly, as the brand symbol. To give flight to the campaign, there were several activities organised at the pavilion encouraging visitors to make small adjustments towards a more socially conscious and sustainable lifestyle, showing them how each change can collectively contribute to a much bigger result.

Given its creativity and impact, the #MyButterflyEffect Brand Campaign won Malaysia’s prestigious Marketing Excellence Award 2017’s gold prize in the “Excellence in Government Sector Marketing” category.
On the cultural and social aspect, we invited visitors to join in for the celebrations organised around Malaysia's 60th Independence Day at the pavilion. Over the many weeks at the Expo, we also conducted arts and crafts sessions, organised kite-flying sessions with visitors and their children, marketed #MyButterflyEffect merchandise and laid out Malaysian delicacies at the café.

Given the popularity, structure and set up of the pavilion, as well as the programmes conducted therein, the Malaysian pavilion received an “Honourable Mention for the Best Interpretation of Theme” by US-based Exhibitor Magazine, marking a successful cross-national and cross-cultural concerted effort by all parties involved.

Backed by this track record, Malaysia is participating in Expo 2020 Dubai, joining over 190 participating countries to be a part of “Connecting Minds, Creating the Future”. To tie in with the Expo’s objectives, the Malaysian Pavilion is centred on the theme “Energising Sustainability”, which captures Malaysia’s commitment to balance socio-economic progress with environmental concerns to ensure a secure and sustainable future. Malaysia’s participation in the Expo is also aligned with the government’s new economic initiative and direction for Malaysia, “Shared Prosperity”.

“Shared Prosperity” is defined as an effort to make Malaysia a country that could be continuously developed sustainably in line with equitable growth at all levels of the supply chain, class, ethnicity and geography and to create a sense of harmony and stability among the people by 2030. One of its main objectives is for Malaysia to be dynamic and an important economic axis in Asia. It is aimed at making Malaysia a united, prosperous and dignified nation to emerge as the axis of the Asian economy. 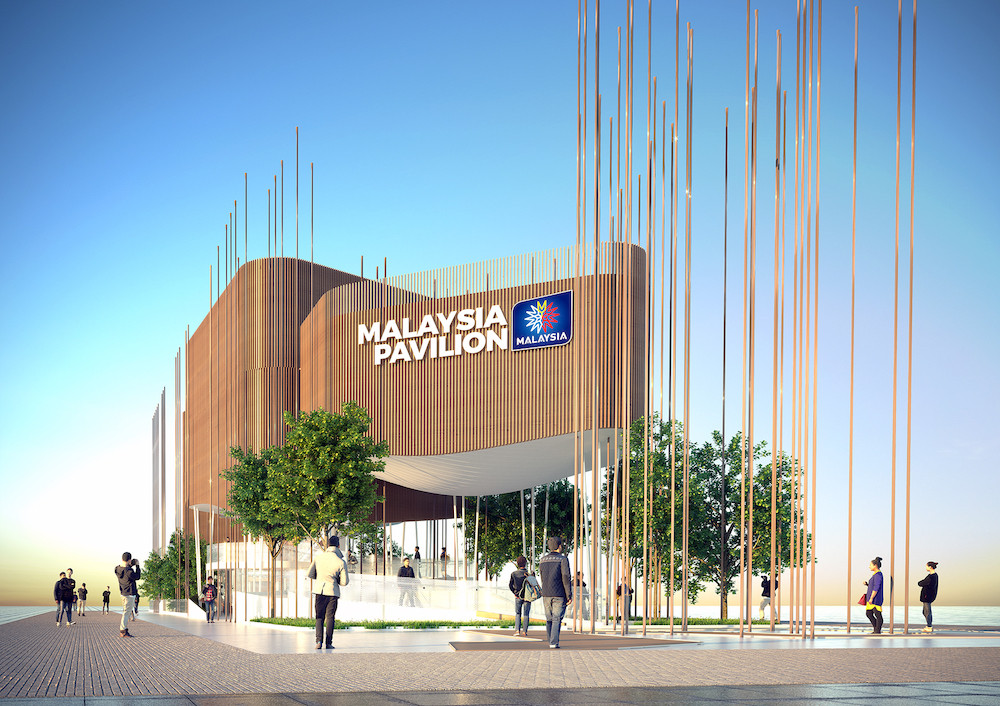 To symbolise the continuation of the winning ripple effect, which was initiated in Malaysia and travelled to Astana, the #MyButterflyEffect Brand Campaign was relaunched in 2019 to lead the trail across continents and countries to Dubai for Expo 2020. The relaunch represents the collective aspirations of Malaysians to spread our wings to new territories, showcase Malaysia in the best light and forge new collaborations internationally.

Leading architecture firm Hijjas Architects + Planners, with decades of commitment to nation building behind them, won the heavily contested design submissions for the Malaysia Pavilion. Hijjas Architects + Planners boasts a string of awards and accolades, and was responsible for the much-acclaimed “four seeds” design at Expo 2015 Milan, which stood out as a visually distinctive organic treat in a sea of architectural extravagance.

For Expo 2020 Dubai, the architectural design of the Malaysia Pavilion mimics the rainforest canopy, depicting the symbiotic relationship between man and nature. The building blocks are elevated for aesthetics and practicality. With an unobstructed inviting open space on ground level, the Pavilion is split into two tiers: the floating exhibition spaces above and the underground business centre below, allowing for a spatial separation between these distinctive functions.

The pavilion is portioned into four segments, the first of which, “Energising Today”, will journey visitors through a narrative about the role of our forests in climate change mitigation and our sustainable forest management, which is connected to the development of our agricommodity sector, and how this sector has shaped the socio-economic development of the country. The middle segment of the pavilion will be on “Energising Tomorrow,” showcasing Malaysia’s commitment to becoming a developed and high-income nation, driving the agenda of climate actions with Science, Technology and Innovation as the core drivers.

The third segment of the pavilion, “Energising Harmony”, will encapsulate how Malaysians of diverse cultures, traditions, ethnicities and languages live harmoniously, working together towards the nation’s progress, unity and stability. This segment will host an exotic ensemble of multi-cultural heritage and contemporary experiences through daily shows of music and dance.

The final segment, “Energising Business”, portrays the role of private sectors, state-owned enterprises and government initiatives in promoting sustainable development across all industries. This segment will serve to increase business connectivity among academic, business, research and diplomatic communities through workshops, seminars and dialogues.

Overall, the pavilion aims to inspire visitors through an immersive experience of Malaysian hospitality, the biodiversity of the rainforest and the country’s efforts at long-term sustainability across various industries.

The theme of Energising Sustainability will also be expressed through the six clusters of the pavilion’s programme for the Expo:

The pavilion will be assigning a month for each of the above clusters, offering participants unique perspectives on Malaysia’s concerted actions to energise sustainability in these areas, through its range of talks, discussions and business matching sessions.

As a young, vibrant, multi-racial nation steeped in rich cultural heritage, Malaysia has been recognised for its wide spectrum of achievements. We are constantly refining brand Malaysia so it remains relevant to the global audience and to us Malaysians as well. The emphasis has been, and will continue to be, to evolve without forgetting our roots.

Brand Malaysia has benefitted hugely from showcasing itself in front of a growing global audience at World Expos. With over 50 years since our country first participated in a World Expo, we stand by our friends at the BIE to share Malaysia’s success narrative of a culturally diverse melting pot emerging as a vibrant economy and innovation destination, at future Expos.

Together with the BIE, we are committed to connecting, collaborating and creating a promising future for all.

This article is adapted from a text that was first published in the 2019 edition of the BIE Bulletin entitled “Image of a Nation: Country branding at World Expos”.