Adrian Smith + Gordon Gill Architecture (AS+GG) designed the Expo 2017 Master Plan and associated 33 buildings considering the designated theme, “Future Energy,” a concept that is aimed at finding ways to achieve qualitative changes in the energy sector, primarily for the development of alternative sources of energy and transportation.

Finding sustainable energy supplies and a solution to these concerns ensures economic growth and improves social standards while reducing the burden on the environment.

From the start of Expo 2017, it was understood that the project was rich in potential, rich in program and had a vast array of building types associated with it. It had cultural significance and it was clear that it was a transformational project not just for a city, but for a country. The concept for the Expo - “Future Energy” - aligned well with the Legacy approach for the project.

The Expo was visited by 4 million local residents and tourists. With around 85% of the total number of visitors being citizens of Kazakhstan, it was crucial that the community was fully engaged with the buildings. It was important for the team to understand the larger issues surrounding the event and the city and to conceive of the buildings and their related Master Plan as an integrated urban, architectural, social, cultural and sustainable contributor to Astana.

The concept for the project was based on the criteria that designing for the Legacy mode was as important, if not more important, than the Expo mode. There was an understanding that the Expo would capture the city’s attention for three months, but the economic prioritisation was that the buildings would last for decades. If there was value to invest in the life-cycle Legacy of a country and city, then the buildings and Master Plan needed to address the community’s post-Expo functions at least as equal to those for the Expo itself.

Expo City, the post-Expo development, will embrace the Expo 2017’s “Future Energy” concept by becoming one of the world’s most energy efficient communities, where energy consumed by the community will be provided from renewable sources. Buildings will utilise a variety of energy saving and generation concepts in order to provide a low energy-use platform in both Expo and Legacy modes. AS+GG’s Expo Master Plan provides the infrastructure to encourage and support the use of an array of networks including using vehicles that use renewable fuels. The forms and language of the buildings are designed to reduce their energy needs and operate as “power plants” that harness energy from the sun and/or wind. The buildings will use this power directly or supply it to the district-wide smart grid for storage or use.

As we continue to deal with growing urban populations and increasing demand on basic resources such as water, food and energy, Expo City will become a model for future cities. It will be a hub of knowledge in renewable energies generation, and distribution, and a laboratory of these technologies that will serve as an example for future generations. The Smart City concepts and technologies introduced in Expo City can be expanded and integrated into the rest of Astana and eventually Kazakhstan. 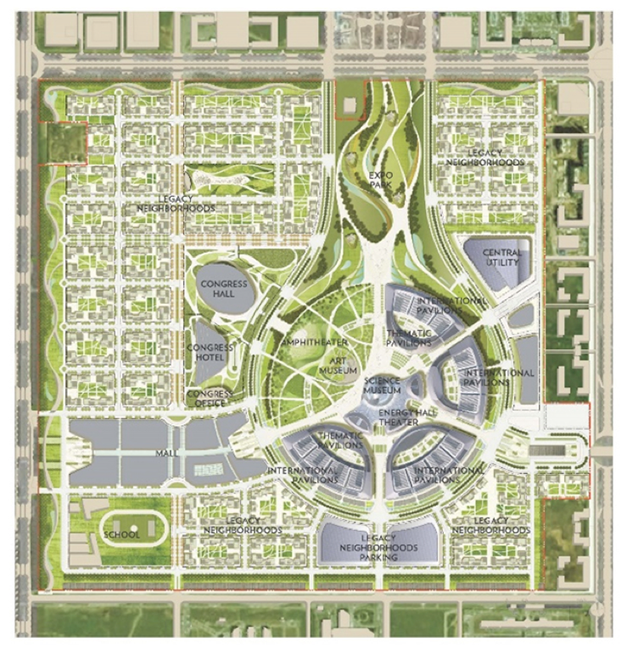 The Expo City project site is located in Astana, Akmola Province, Kazakhstan at a cultural axis, just south of the Bayterek Tower and east of the knowledge/science centre of Nazarbayev University. Because of this distinct and meaningful site, Expo City is positioned to be a significant landmark in Astana.

Although historically the site was a small-scale agricultural development—and prior to that it would have been steppe—no farmland was disrupted and the site was designed within an existing boundary delineated by existing main roads. The site works well as an infill site that completes the southwestern corner of Astana.

Within the general energy theme of the Expo, the overall aim was to reduce the energy demand of the site to the greatest extent possible using both passive and active strategies. At the same time, opportunities for generation of power were investigated and incorporated into the public realm and the building design.

The architecture and Master Plan were designed by using site-specific indicators like solar and wind orientation, weather conditions, and the cultural context, that were determined from a series of studies with the goal of minimizing the site’s energy-use while maximizing its energy-harvesting potential and comfort levels.

The Master Plan for Expo City was designed around the same guiding principles as the Expo. The resulting analysis offered the most efficient orientation in order to optimise solar radiation to reduce energy usage for heating. Not only does this strategy improve user comfort but it also maximizes the potential energy that can be generated from building mounted photovoltaics and wind turbines.

The Master Plan was conceived not as an Expo Demonstration project but as a community for the city and its residents. The approach being that the buildings will be designed and built once and transition from Expo to Legacy would be minimal. This concept includes systems and platforms for everything from technology and energy to public transportation and public space.

Equally important, are the lasting physical connections that will be developed from the Expo site to existing sites around Astana. For example, a covered city concept has been developed to connect the Nazarbayev University, the future train station, the retail corridor and the Expo buildings. This zone will encourage pedestrian use and connectivity all year round and will include residential, office cultural and retail use. To the north, the linear park which serves as an entrance to Expo, is anchored by the Bayterek tower; toward the south, by the “New Symbol of Astana:” the Kazakhstan Pavilion.

The site-wide infrastructure concept, developed by the AS+GG team, is an integration of occupants, buildings and utilities. These include a smart-energy grid, smart recycled water grid, integrated waste management system, water reduction and waste to landfill reduction targets. 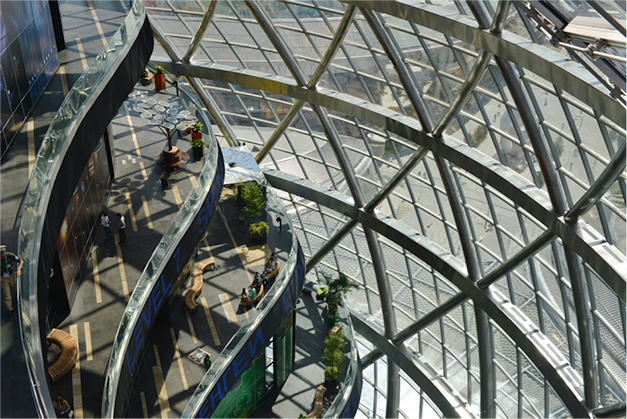 Phase 1 or the “Expo Mode”, contains the Expo buildings including the central Kazakhstan Pavilion; Theme, Corporate and International Pavilions; as well as hotel, Congress Center, retail, art and performance spaces. The first phase includes the design and construction of a series of buildings that will act as a “covered city”, which will include retail and office spaces. Phase 1 also includes a series of temporary buildings designed to comply with their Expo function and be efficiently moved to their final destination in Astana or any other desired destination after their Expo use. This group of mostly pre-fab modular buildings include Kiosks, entry canopies, taxi and bus stations and amphitheatre enclosures.

Phase 2 or the “Legacy Mode”, will integrate and adapt the Expo mode buildings into their final legacy mode. International and theme pavilion buildings will be converted into an office and research park, attracting international companies and entrepreneurs. Expo on grade parking and service zones will be transformed into thriving first class integrated neighbourhoods with an additional 667,000m2 residential area, as well as office, hotels, local markets, and civic and educational facilities.

When considering the Master Plan, for the Legacy mode, the design team’s first observation was the potential lack of human scale given the immense scale of the site as well as the required space needed for large crowds. This deficiency in a city with such harsh weather conditions does not promote a sense of place and would not be conducive to a healthy life style of a walking city. The design proposed ways to help the citizens of Astana enjoy a more walkable city with a denser - and healthier - urban environment that promoted community engagement through public spaces and gardens.

Through careful environmental analysis, the Master Plan was designed to significantly reduce winter winds on public streets in order to enhance and promote walking. Primary and secondary streets were sized to a more comfortable human scale.

Landscapes were designed to make open park areas more comfortable all year long. Building envelopes were shaped to maximize sun radiation on living spaces to reduce energy consumption and to improve indoor spaces all year long. For the harsh winters, connectors were proposed between buildings that promote pedestrian circulation connecting the centre of the complex for those who study, shop and work so that all can enjoy the array of cultural venues by simply walking through a series of public enhanced spaces.

The key to the economic value of the project was the Legacy mode. The Organiser should not have to spend billions of dollars on an Expo that lasted three months when they could create an economic engine for the City that would last a lifetime. Establishing new standards of energy with a neighbourhood that will thrive and improve the way of life in Astana was an integral part of the process.

The Master Plan design effort also included all the periphery housing parcels and their architectural and sustainable guidelines. The process included meeting with housing developers and their architects and discussing the design of buildings and parcels in a sustainable way. In the end, every residential parcel was sold generating a great amount of revenue for the Expo Organiser, thus reducing the need for public funds.

Expo 2017 Astana closed its gates on 10 September 2017 after 93 days. Post Expo, the legacy development will be one of the most sustainably built in the world. The design calls for 100% of the post-Expo non-potable water demand to be provided by the on-site water reclamation facility and 24% of the post-Expo electrical demand to be met from on-site BIPV energy systems. As designed, the total post-Expo grid energy demand is 49% less than an ASHRAE 90.1 2010 Baseline, while the office buildings will use 22%-40% less energy than ASHRAE 90.1:2010 Baseline. Overall grid energy reduction is 59%.

Other key areas that add to the efficient legacy transformation include developing Expo parking areas into residential neighbourhoods; integrating exhibition buildings into a first-class office complex; orienting the site for dedicated pedestrian and bike lanes; and creating dozens of public transportation links to the rest of Astana.

To find out more, read the full article that initially appeared in the 2017 edition of the BIE Bulletin.