The BIE held yesterday its 155th General Assembly. This session was calmer than the previous one during which the 168 BIE member states elected the host for Expo 2020, but important decisions were made, starting with the recognition of Expo Astana 2017 and the Horticultural Expo Beijing 2019.

The recognition is an important step in the organization of an Expo. It is the formal approval by the BIE of the Expo project and it allows the host country to officially start preparing for its event and inviting countries to participate. The recognition is traditionnaly celebrated by the handing over of the BIE flag to the Expo organisers. 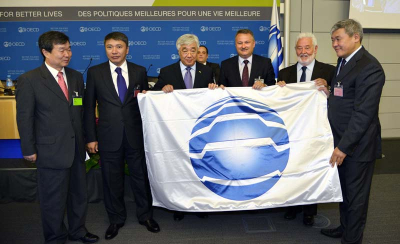 "Recognition of the exhibition and receiving the BIE flag is a memorable event for our country" Mr Zhoshybayev, Commissioner of Expo 2017, told the Assembly. Kazakhstan has been building its recognition dossier since its election in November 2012 and the decision of the General Assembly rewards its efforts regarding the development of the Expo theme, the construction plans and regulations. Expo Astana 2017, dedicated to the theme "Future Energy", isn't conceived by the Kazakh government as a short term event but rather as a key step in developing green economy and sustainable energy in the country. 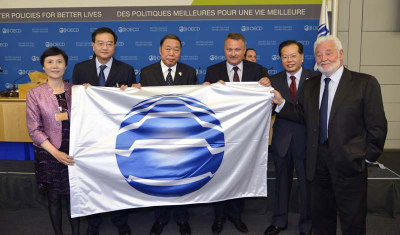 Expo Beijing 2019 also received formal recognition from the BIE. The Expo had already been approved by the AIPH (International Association of Horticultural Producers) with who the BIE co-supervises this type of horticultural Expos. 9 years after Shanghai 2010 and 20 years after the last Chinese Horticultural Expo (Kunming 1999), China will host yet another Expo, this time dedicated to the theme "Live Green, live better." Closely linked to the concept of Green Cities advocated by the AIPH, this Expo theme will allow China to "work with countries all over the world in advocating green lifestyle as well as ecological civilization construction and pushing forward the progress of human civilization" Mr Wang, Vice Chairman of the CCPIT, explained to the General Assembly.

Another important decision of this 155th General Assembly was the approval of the date for Triennale di Milano scheduled for 2016. The Triennale, dedicated to the theme "21st Century, design after design" is intended to question and investigate possible new meanings and perspectives for both the practice and culture of design in the new millennium" said Mr Claudio de Albertis, President of the Triennale design Institution. The Expo should be recognised at the next General Assembly.

The General Assembly also allowed all upcoming Expos to present their progress reports. Scheduled to open in less than a year, the organization of Expo Milan 2015 is at full speed. According to Giuseppe Sala, Commissioner of the Italian Government for the Expo, 147 countries and organisations have confirmed their participation to the event and the site should be ready by April 2015. Antalya 2016, the next horticultural Expo before Beijing is also moving forward. 25 000 trees from over 100 species will be planted by the end of 2014, the cultural and events program is under preparation and the design for the symbolic Expo Tower will be revealed in June 2014. Invitations to participate were sent in December 2013 and 41 countries have already responded. As for Expo Dubai 2020, the organizational comity created during the bid is still working on the Expo project. The next is the preparation of the registration dossier.

This General Assembly was also the opportunity for the future candidate city of Lodz, Poland, to express its will to organize an Expo. The mayor of Lodz, Hanna Zdanowska, presented in a few words the great industrial past and the dynamic present of the city and explained the amazing opportunities an Expo would bring in terms of local development and international outreach.