Japan submitted today a letter of candidature to the Bureau International des Expositions (BIE) to organise World Expo 2025 in Osaka.

Japan’s candidature for Osaka is based on the theme “Designing Future Society for Our Lives”, and the Expo would be open from 3 May to 3 November 2025. 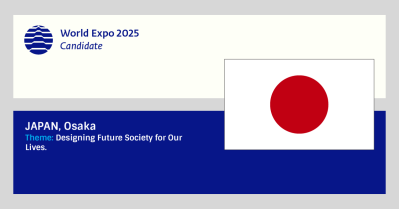 Japan’s candidature follows the one submitted by France on 22 November 2016, which opened the six-month window during which all other countries may also submit their own bids. The final deadline for the submission of bids is at 6pm (Paris time) on 22 May 2017. The closing of the candidature list will be followed by the examination phase, which will include the submission of bid dossiers, BIE Enquiry Missions, presentations, and forums. The 168 Member States of the BIE will elect the host country when the 164th General Assembly of the Organisation meets in November 2018.

“The BIE is pleased to receive Japan’s bid for World Expo 2025 and we look forward to the beginning of the examination phase in order to learn about the vision for each project”, commented the Secretary General of the BIE, Vicente G. Loscertales, on receipt of the letter of candidature. 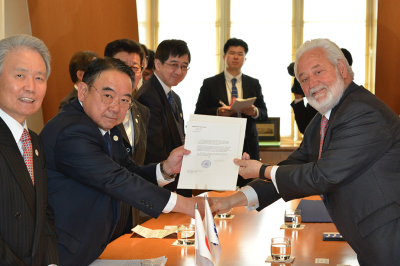 World Expos, known officially as International Registered Exhibitions, are organised every five years. They can last up to six months, and international participants can build their own pavilions on the Expo site. The themes of World Expos are designed to raise awareness of and find responses to universal challenges of our time. The most recent World Expo was held in the city of Milan, Italy, in 2015, and gathered over 21 million visitors under the theme “Feeding the Planet, Energy for Life”. The next World Expo will take place in Dubai (UAE) between 20 October 2020 and 10 April 2021 under the theme “Connecting Minds, Creating the Future”.

Japan is a founding member of the BIE, and the country has successfully organised five Expos under the auspices of the Organisation. In 1970, Osaka Prefecture hosted Asia’s first World Expo, attracting over 64 million visitors, making it the second most visited Expo in history. Since then, Japan has organised three Specialised Expos – in Okinawa in 1975, in Tsukuba in 1985 and in Aichi in 2005 – as well as one Horticultural Expo in Osaka in 1990.

Situated at the mouth of the Yodo River, the city of Osaka is the capital of Osaka Prefecture, located within Japan’s Kansai region. The Prefecture has a population of 8.8 million, while the larger urban area has a total population of over 19 million, making it Japan’s second largest agglomeration.