The General Assembly was the first opportunity for BIE Member States to hear from all four candidates, following the closing of the candidate list on 22 May 2017. The four candidates are due to submit their bid dossiers in September 2017, which will be followed up by BIE Enquiry Missions in early 2018. Member States of the BIE will vote for the host country of World Expo 2025 during the 164th General Assembly in November 2018.

Presenting France’s candidature for Expo 2025, Pascal Lamy, the Interministerial delegate in charge of the bid, stressed the key role of young people in the Expo project, specifying that they were instrumental in choosing the proposed theme, “Sharing our Knowledge, Caring for our Planet.” The theme is aimed at new generations, according to Mr. Lamy, who added that 2025 will mark the 10th anniversary of the Paris Climate Agreement and the Expo would thus be an opportunity to measure what has been achieved and what can still be done. Jean-Christophe Fromantin, President of the ExpoFrance association, also emphasised the importance of mobilising young people, in France and across the world, to support France’s Expo project. 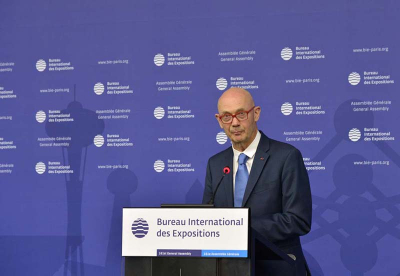 Delegates were also addressed by former Minister and astronaut Claudie Haigneré, who described France’s Expo bid as a “superb adventure”, and by Erik Orsenna, a member of the Académie Française, who declared that World Expos can help us to find “the universality of our planet” once again. Demonstrating the support of local authorities, a video was shown in which the Mayor of Paris, Anne Hidalgo, the President of the Île-de-France region, Valérie Pécresse, and the President of the Metropolis of Greater Paris, Patrick Ollier, express their support for the Expo 2025 project.

“Designing Future Society for Our Lives”, Japan’s proposed theme for Expo 2025 in Osaka, was presented to BIE delegates by Sadayuki Sakakibara, Chairman of the 2025 Japan World Expo Committee and Chairman of the Japan Business Federation (Keidanren). Mr. Sakakibara told the General Assembly that the theme ties in with “Society 5.0”, a project that draws support from both the private and public sectors and aims to create a future where technology such as robotics, IoT, Big Data and artificial intelligence are employed in the service of humanity. 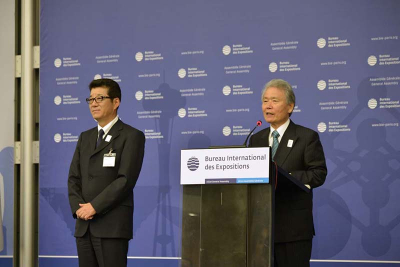 Osaka Governor Ichiro Matsui informed the delegates of the Member States of the BIE that Kansai’s “spirit of endeavour” has enabled them to create innovative solutions to global issues. He added that: “visitors to Expo 2025 Osaka will get a taste of the latest technologies, by which individuals can enjoy a healthy life in both mind and body”. The Japanese delegation also showed a video featuring Prime Minister Shinzo Abe, in which he emphasises the Government’s support for the Expo 2025 project and states: “We must all be Osakans, to go beyond what is known, think outside the box and embrace trial and error… to herald our future possibilities.”

Promoting Russia’s Expo bid, Alexander Chernov, the representative of Ekaterinburg World Expo 2025 Bid Committee, told delegates that following the city’s previous bid to host World Expo 2020, “over the past 5 years, members of the Expo team have held on to the idea of becoming a part of the Expo adventure, leading to a bid for Expo 2025”. Regarding the proposed theme. “Changing the World: Innovations and Quality of Life”, Georgy Kalamanov, Deputy Minister of Industry and Trade, said that Expo 2025 would “be a stepping stone for achieving the important goal of uniting the whole world in an exclusive dialogue dedicated to our children and future generations.” 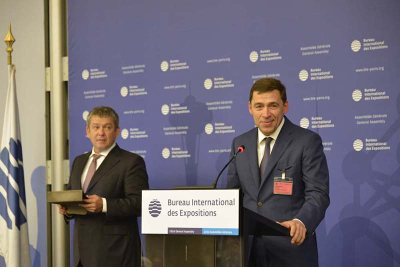 Pledging the full support of the Russian Government and the local community, Ekaterinburg Governor, Evgeny Kuyvashev told delegates that Expo 2025 would be an opportunity to showcase the face of “New Russia”. Mr. Kuyvashev added that the city, the fourth largest in Russia and situated at the crossroads of Europe and Asia, has “a successful track record for hosting world-class events and international gatherings” and is ready to host the Expo. The proposed site for the Expo is located on the bank of the Verkh-Isetsky Lake, close to the city centre.

Azerbaijan’s Ambassador to France, Elchin Amirbayov, presented delegates with his country’s project to host Expo 2025 in Baku, “one of the most beautiful cities in the world” that has been transformed by construction and urban planning projects in the past decade. Ambassador Amirbayov pointed out the country’s location on the ancient Silk Road, which “served as an important channel for sharing knowledge and skills, and shaped the history, culture and tolerant outlook of the country.” The country’s location, natural resources and dynamic young population, mean that it “is poised to become a major commercial and transportation hub.” 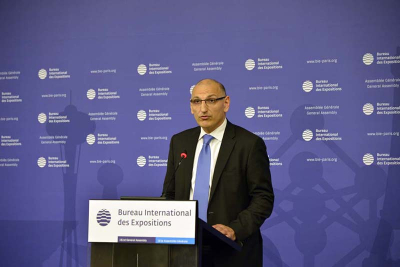 Regarding Azerbaijan’s proposed theme of “Human Capital”, the Ambassador told delegates that it would allow the Expo to be “an exploration of how human ability, in all its forms, can be best applied across all aspects of society for the benefit of everyone.” The Expo project aims to combine the country’s human potential and natural resources, and if elected, would be “a gesture of encouragement for all young, independent countries.” Ambassador Amirbayov added that the proposed site of the Expo would form an extension to the country’s capital, providing affordable housing and “world-class amenities” to its residents.