In 1986, I worked for Washington magazine, in the state adjacent to British Columbia and sharing a history of Coast Salish peoples, exploration, settlement, and trade dating back to the Hudson’s Bay Company. Our magazine put out a special issue, “Roads to Expo,” suggesting travel routes to the Expo in hopes of gaining some tourist dollars from travellers headed north to Vancouver. After the Expo opened, I was sent up there to scout it out.

I was prepared not to like it, if only because Vancouver was something of a rival to Seattle. But Expo 1986 was a terrific event in so many ways. The videos and multimedia shows were memorable, like the holographic effects in the General Motors ‘Spirit Lodge’ where a First Nations-like elder preached about the freedom of movement. Alfred Heller, writing in his book “World’s Fairs and the End of Progress” likened its powerful sales pitch to the effectiveness of World Expo 1939 New York’s ‘Futurama’ in envisioning the future of transportation. While today, the presentation induces cringes for making an indigenous man the spokesperson for highways, the visual effects also set a new standard. 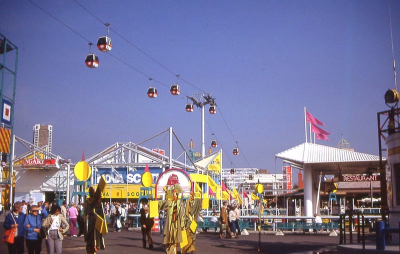 Heller also points out the GM message seems to conflict with the star attraction of the artwork, ‘Highway 86’, an undulating sculpture of vehicles frozen in time and space as if caught in some kind of doomsday evacuation. It spanned the whole Expo site. As a fun playground object it worked, but so too did its message about the problematic nature of burning fossil fuels, even more relevant now. It was sadly dismantled when the Expo closed.

At the Canadian Pacific pavilion, I was blown away by the film, ‘Rainbow Wars’, with its powerfully entertaining message of bridging differences between cultures defined and separated by colour. The Northwest Territories pavilion charmed me with its honesty about the modern problems with machines and resource exploitation in the far north. The pavilion’s restaurant was popular too: I remember eating a seafood chowder of Arctic char.

The China pavilion was fascinating to this American visitor, coming at a time when relations with the United States were shifting. Mao buttons for sales as souvenirs felt somewhat transgressive still.

The real impact of Expo 1986 was on Vancouver itself. What had once been a sleepy provincial city in the 1950s and 1960s burst with development, mass transit, and mass appeal, bringing in immigrants, high-rises and new wealth to the city. Its Pacific Rim profile was lifted.

If the Expo site on False Creek was largely dismantled, the city sprouted elsewhere and by the 1990s the so-called “Vancouver miracle” was being touted across the globe as the way to achieve density and liveability with planning, investment and growth. It also paved the way for hosting the Winter Olympics in 2010. There was more to British Columbia than trees, Mounties and appropriated First Nations artwork.

Urban problems and affordability became issues, but the city’s growth was a kind of inevitable consequence of being a showcase for urban possibilities. British Columbia’s former attorney general, Geoff Plant, wrote on the Expo’s 30th anniversary about the consequences of asking the world to come and take a look: “The world accepted our invitation. What did it see? A marvellously beautiful setting, a mild climate, the rule of law, respect for private property rights, a balanced market economy, safe neighbourhoods and a tolerant society. Who can blame the world for wanting some of this?”