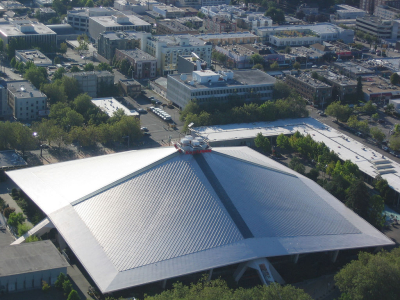 In 1958, fair planners revealed a scheme to transform the planned Coliseum into a venue for professional sports after the fair—Seattle had no major pro-sports franchises at that time. Hockey was the top target, followed by basketball. The city also wanted a convention-friendly facility. Seattle had no convention center or Kingdome then either.

Architect Thiry designed the interior to be “convertible,” meaning that seating and other aspects of the interior could be used by multiple sports, and for concerts, trade shows, political conventions, boxing matches and the like. The seating capacity could be expanded from, say, 13,000 to as much as 18,000 with portable seats. If Seattle wanted indoor pro sports under one roof the facility had to be flexible.

After the fair closed in the fall of ‘62, the city bought the arena and the property it say on from the state and paid to convert it—which required lowering the floor to make the view-lines acceptable for professional hockey. This, supportive city council members predicated, would be the facility’s “moneymaker.” 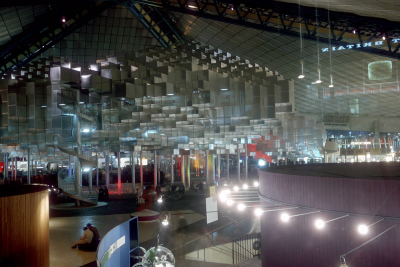 It took about two years after the fair to make conversions, and the new Coliseum opened in 1964. Its first two pro-sports events were a Seattle Totems minor league hockey game against Toronto, and an exhibition NBA game featuring the LA Lakers against the San Francisco Warriors. The NHL did not come and money was not made from it.

Seattle did get a basketball franchise, the SuperSonics, in 1967 and they made the Coliseum their home at times throughout their run in Seattle, and the WNBA champion Storm have been at home there for years. The NBA left for Oklahoma in 2008 after a dispute over arena renovations, but there are hopes the current makeover will lure the NBA back. That would be the final fulfillment of dreams from the 1950s: NHL Hockey and NBA basketball under the paraboloid roof at last.

Hockey will prove to be the 21st century catalyst of a more than $700-million privately funded renovation. The renewed arena would also be a major state-of-the-art concert venue (the first famous concert there was The Beatles in 1964.)

There are some who believed the arena, a historic landmark, is being demolished or “dynamited,” as 710ESPN’s Brock Huard said recently. Nothing could be further from the facts. While the interior is being demoed, the Coliseum’s familiar roof and massive support footings are simply being redeployed yet again as a “rain hat” for a new generation of our sports ambitions.