Illuminating the White City: Tesla vs. Edison at Expo 1893 Chicago Expo 1893 in Chicago, the World’s Columbian Exhibition, surpassed all previous World Expos in size and unapologetically embraced progress and the modern era. The widespread use of electricity on the site of the Expo was a symbol of the positive side of modernity.

For the organisers, this major endeavour was essential, and it led to one of the most significant corporate and technical rivalries of the time so much so that it shaped the future of electricity in the United States.

The contract to light up the Expo site and provide power to exhibitors was the subject of a tightly fought contest between General Electric’s direct current (DC) system based on Thomas Edison’s inventions, and Westinghouse’s alternating-current (AC) system, developed by Nikola Tesla. The awarding of the contract took place during the period known as the “War of Currents”, when debate was raging over the benefits and drawbacks of the DC and AC systems. 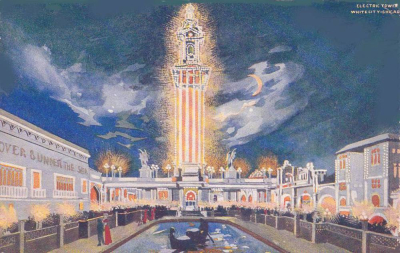 Organisers opted for Westinghouse’s more efficient and less expensive proposal, marking a major victory of AC over DC, despite on-going concerns over the safety of the former. General Electric retaliated by banning the use of the Edison bulb on the site, which Westinghouse circumvented by developing a double-stopper light bulb and thus avoiding the patent.

Once the Expo opened, visitors could marvel at the brightly-lit pavilions, with the entire 190-hectare site being lit by Tesla’s AC system. Located on the shores of Lake Michigan, the site was centred around 14 classical style pavilions with alabaster facades. The stunning combination of bright lights and white alabaster led to the nickname “The White City” being given to the Expo ground. 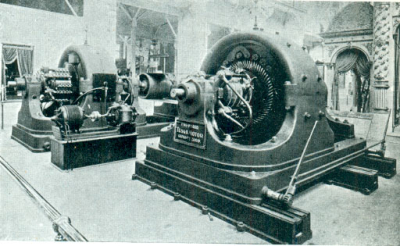 Beyond the lighting, visitors could move around the site on moving walkways, elevators and a train, all powered by electricity. German firm Siemens showcased a tram at the Expo, which was the first in the world to be operated on the alternating current system. The use of electricity on the Expo site was so elevated, that its energy consumption was three times higher than the electricity used in the whole city of Chicago at the time.