Such transition points are to be expected, especially where trying to anticipate the future is concerned. The Hannover emphasis on sustainability and urban design is still incredibly relevant, perhaps even more so in a world enduring a pandemic that could shift the way cities, and Expos, are built and perceived. But I think it’s fair to say that Expo 2000, as good as it was at the basics, lacked verve.

But what a difference a decade made. In June 2010, I made my first visit to Expo 2010 Shanghai. If Hannover hinted at 21st Century dynamism, Shanghai’s embodied it. I have read accounts of the overwhelm and wonder visitors felt at Expos like London’s Great Exhibition of 1851 in the Crystal Palace, Chicago’s Columbian Exposition of 1893, the Expo 1900 Paris, or the Louisiana Purchase Exposition in St. Louis in 1904. These were Expos whose scale and eye-opening nature changed the way visitors saw the world. 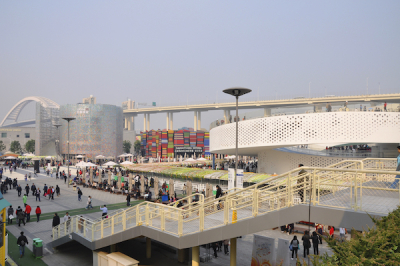 The excitement at Shanghai was palpable, and the scale hard to conceive. The Expo site was 523 hectares or about two square miles—bigger than some countries. During my June visit, it hit a record attendance day with over 550,000 people, a record shattered the following October with an attendance of over 1 million on a single day. The total number of visits came to 73 million.

The crowds were huge, enthusiastic, and mostly patient. The popular Saudi Arabia pavilion had snaking lines over two miles long with wait times of up to eight hours. The Expo sold portable folding stools to accommodate people who tired of standing. The Chinese visitors were enthusiastic, of all ages, and seemed, at times, almost manic with excitement. Huge scrums formed as people crowded to get their Expo passports rubber-stamped. This was not an Expo where social distancing could have been implemented. 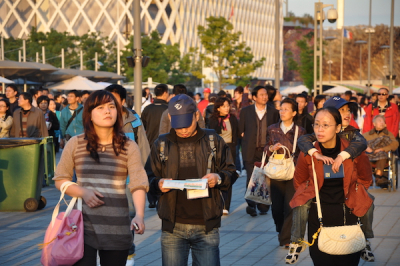 The popularity of the Expo made is somewhat inconvenient—it was best to go in the evening when crowds were smaller and the “plum rain” season nights a tad cooler and less humid. The scale also made it difficult to see it all. Over 170 countries participated. After eight days of visiting between eight and twelve hours per day, I saw 102 national pavilions or major exhibits and an additional 13 corporate or themed pavilions. Expo 2010 Shanghai was like a huge city unto itself, impossible for any person to experience fully.

And because it was China—the country’s first World Expo—and because it was making a statement about its place in the modern world and economy in a new century—there was no shyness, no Expo fatigue, no ambivalence about messaging. The world seemed to bring its best “game” as far as pavilions were concerned: the Saudi pavilion, which looked like the hull of an oil tanker with an oasis on top that offered a spectacular outdoor view of the Expo site; the landmark China Pavilion with its red lacquered inverted pyramid design and vigorous storytelling about China’s history and urban destiny; and Germany’s pavilion bringing a crisper message about a greener urban future, “Balancity,” where the good life could be had with sustainable policies and compostable clothing.

Also memorable were pavilions from countries that might seem like forbidden fruit for Americans like me: the pavilion of the Democratic People’s Republic of Korea touting itself as a “Paradise for People”; or the Venezuela Pavilion, a shrine to then the self-styled revolutionary leader Hugo Chavez whose personal posturing seemed to presage a familiar style of leadership.

Thinking back on Expo 2010 Shanghai, it stands out as a once-in-a-lifetime experience. My first Expo in Seattle in 1962—only 30 hectares in size--was described as a “jewel box fair.” If so, Shanghai’s was an entire treasure chest of civilizational riches. It was impossible to experience completely, easy to get lost in, and hosted by a nation running to the future. That energy might be hard to sustain, but it is not easy to forget.