Expo 1889 Paris is remembered for introducing the world to the Eiffel Tower. However, it was also the site of another important debut: French visionary engineer Aristide Bergès’ demonstration of hydroelectricity, a concept known as “Houille Blanche” or “White Coal”, that swept through Europe and the world.

In the mid 19th century, the industrial revolution made coal the major source of energy and thus, a precious commodity. So when at the Expo, Bergès’ exhibit informed visitors about an alternate energy source, he called it “Houille Blanche”, to draw attention from visitors and to highlight the energy potential of water from the mountains, which had been ignored in favour of coal.

His display showed a turbine with a plaque attached that included a long inscription starting with ‘The Exploitation of White Coal’.

This concept had been tested in 1882 at Bergès’ first paper mill close to lake Lancey (in the French department of Isère), where he used Alpine water to power the machines using the penstock technique. This involved diverting descending torrents into metal pipes connected to a set of turbines in the factory. However, the lake’s irregular flow hindered Bergès’ plan for mass paper production. 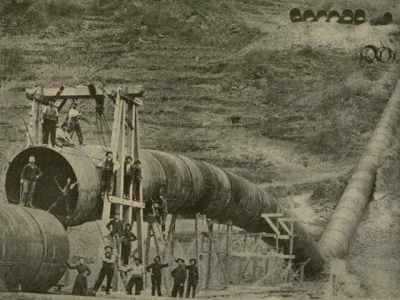 The increased needs for energy to power the defibering machines were satisfied by harnessing power from 200- and then 500-meter high-head falls, when Bergès discovered that the farther the water falls, the more power it generates. Then driven by the motto “technology should serve humanity”, he attached a Gramme Dynamo to the turbines and discovered that it produced electricity; which he used to power his mill; and eventually the entire community of the Grésivaudan valley.

Aristide Bergès’ ceaseless contributions to long-lasting energy solutions and his legacy of using the power of water from the mountains ushered in the hydropower revolution at the end of the 19th century. His modernisation and industrialisation of hydro-mechanical techniques gave the Alps an advantage in terms of industrial growth and paved the way for solutions to current challenges in energy, which will be discussed in detail at Expo 2017 Astana, themed “Future Energy”.