The sphere-shaped Kazakhstan pavilion designed by Adrian Smith + Gordon Gill at the centre of the Expo 2017’s site is the latest addition to the city’s bold and diverse architecture, and its intellectual legacy will be a boost to the city’s striking status as contemporary and business capital of the country.

What is perhaps most astounding about Astana is the progress and development the city has made in just two decades. Originally Akmoly, the city was declared capital of Kazakhstan only in 1997, replacing Almaty in the south of the country. As a result, Astana is a planned city, straddling the right and left banks of the Ishim River. 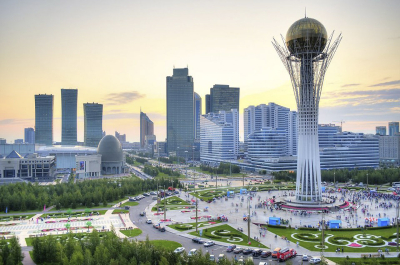 Its landscape reflects a blend of Asian and European architectural styles, organised according to a masterplan, conceived by Japanese architect Kisho Kurokawa. At the centre of Astana stands Bayterek Tower, named after a mythical tree at the top of which a magical bird laid its egg, promising happiness and wealth.

The Tower stands in the middle of Nurzhol Boulevard on the city’s left bank, going from the Presidential Palace to Khan Shatyr, the soaring 150-metre high transparent tent designed by Norman Foster, which hosts a shopping mall and an entertainment venue. 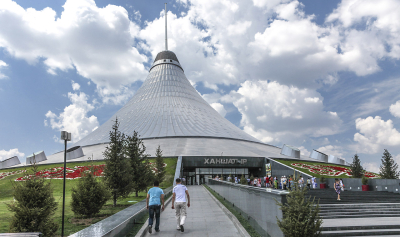 Another of Norman Foster’s creations, the pyramid-shaped Palace of Peace and Reconciliation, impresses visitors on the other side of the Ishim River. The 62-metre high pyramid hosts a congress of religious leaders on a regular basis and its upper section is made of stained glass windows by Brian Clarke, featuring 130 doves to represent peace and the number of different nationalities one can find in Kazakhstan.

Within a stone’s throw from the Palace stand the Kazret Sultan Mosque – the second largest in Central Asia – as well as the Kazakh Eli monument, which stands 91-metre high in deference to the year of Kazakhstan’s independence – 1991.

While Astana is a new city, the area has a long and illustrious past, with the modern city located close to one of the routes of the ancient silk road. This strategic position of exchange and dialogue remains a key part of Astana’s and Kazakhstan’s identity to this day. Astana is now a major business hub and following the end of Expo 2017, the site will be transformed into the largest financial centre of Central Asia.

As Astana continues its rapid development, Expo 2017 comes as a transformational event for the city. Nur Alem – the largest spherical building in the world – is a continuation of the many grand structures that dominate Astana’s landscape and make it the very particular tourist destination it is now becoming.