The futuristic inventor partnered with Abel Pifre to carry out a number of solar experiments in the Algerian desert in order to find alternatives to fossil fuels. The experiments led to the development of the parabolic solar collector, which used specially shaped mirrors to trap rays of light onto a black copper container filled with water, which then was heated to produce steam energy. The device, known as a “solar oven”, was presented at Expo 1878 where it was used to produce ice, amazing visitors and earning Mouchot a gold medal. 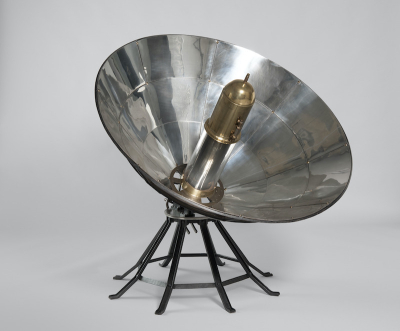 The process was scaled up following the Expo (a scale model of an 1880 version is on display at the Musée des Arts et Métiers), with a demonstration machine used to power a printing press in 1882. While its potential was proven, the affordability of coal, and later oil, prevented the technique from being applied on an industrial level. Nevertheless, the principle was never forgotten, with its modern-day equivalent - concentrated solar power (CSP) – seeing exponential growth in capacity since the start of the 21st century.