I did not know then how unlikely that was. When the exposition’s president Joseph Gandy went to Paris to seek sanction from the Bureau International des Expositions (BIE), he had to advise people how to pronounce “Seattle.” Gandy later said it was a gamble to propose such a little-known city as the first to host a U.S. Expo since World War II. But the U.S. government backed the idea of a “science” fair in the wake of Sputnik and the space race with the Soviet Union. The city had made a global impression with the success of its Boeing passenger jet. And residents of Seattle longed to build a civic center and provided funds for permanent fairgrounds. Gandy got the BIE’s approval, and Expo 1962 took off. 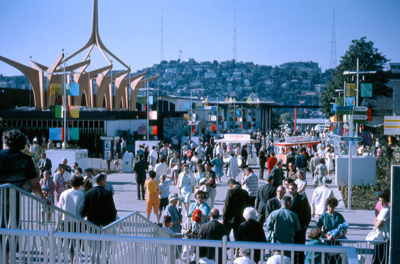 The Expo simply dazzled. The Space Needle became an instantly recognizable landmark. It was designed to be the Space Age’s Eiffel Tower, but with a rotating dining room. On opening night, Seattle VIPs on the Needle’s observation deck sipped champagne from the Eiffel Tower’s wine cellar.

My first visit to the fair was via the Monorail, a sleek elevated train from downtown to the 74-acre (30 ha) fairgrounds. Seattle’s was a compact Expo—described as a “jewel box fair” —filled with wonders. Astronaut John Glenn visited the fair and his Friendship 7 space capsule was on exhibit. The first trans-Atlantic live TV broadcast via satellite (Telstar) included scenes from the fair. Cordless phones were available in the Needle’s rotating restaurant and the Bell Telephone pavilion introduced pagers, speed dialing, and touch-tone phones. The Washington State Pavilion had an elevator shaped like a giant bubble—The Bubbleator—and the exhibits there included what was for many their first look at an actual computer, an eight-ton UNIVAC (definitely not a laptop!). Such exhibits helped inspired the next generation of Seattle innovators, like Microsoft co-founders Bill Gates and Paul Allen. Elvis made a movie there—“It Happened at the World’s Fair” --that captured the look and feel of the exposition and early 1960s pop culture, and the fair reportedly informed Thomas Pynchon’s epic novel, “Gravity’s Rainbow.” 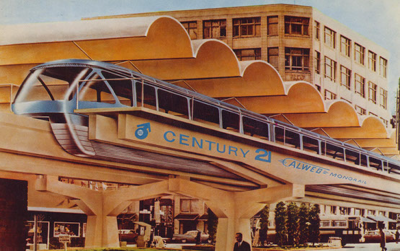 For me, the fun was largely in the details. At a French restaurant, I ate frog’s legs for the first (and only) time. We all went crazy for Belgian Waffles stacked with strawberries and whipped cream. I loved the rides, especially the sharp-angled roller coaster from Europe called the Wild Mouse. Some 10,000,000 visitors came through the gates during the six-month run to Oct. 21, 1962. I don’t think many people went home disappointed. I wish everyone could visit an Expo as a child and carry away the sense of wonder that, in my case, has lasted a lifetime.

Elvis Movie: “It Happened at the World’s Fair”

Book about the Expo: “The Future Remembered” by Paula Becker and Alan Stein