The content and programming of the 23rd International Exhibition of Triennale Milano were announced today at a press conference in Rome. The XXIII Triennale, which aims to question the mysteries of the known world and foster open, multilateral debate and interaction on the challenges facing the planet, will take place between 15 July and 11 December under the theme “Unknown Unknowns. An Introduction to Mysteries”.

Hosted by Italy’s Ministry of Foreign Affairs in Rome, the press conference gathered national and international press correspondents, diplomatic representatives and key stakeholders. Attendees were briefed on the theme of the XXIII Triennale and were given an overview of its thematic exhibits, international participation, and events programme.

Luigi Di Maio, the Minister of Foreign Affairs and International Aid of Italy, made opening remarks at the presentation, followed by Dimitri S. Kerkentzes, Secretary General of the Bureau International des Expositions (BIE), Stefano Boeri, President of the Triennale Milano and Carla Morogarro, Director General of the Triennale Milano. The Curators of the International Exhibition, Ersilia Vaudo and Francis Kéré, then explored in further detail the content of the thematic exhibitions and installations.

The 23rd International Exhibition of Triennale Milano will be composed of a constellation of exhibitions bringing together 400 artists, designers and architects and featuring 23 international participants including six African pavilions. The thematic exhibition will be the nerve centre of the XXIII Triennale, presenting over 100 works including four special commissions entrusted to Japanese designer Yuri Suzuki, Italian designer Irene Stracuzzi, USA architecture collective SOM, and Turkish-American artist Refik Anadol. A series of corresponding projects, including works by Francis Kéré, a welcome video installation created by philosopher Emanuele Coccia, and the Mondo Reale exhibit in partnership with the Fondation Cartier pour l’art contemporain, will complete the experience. 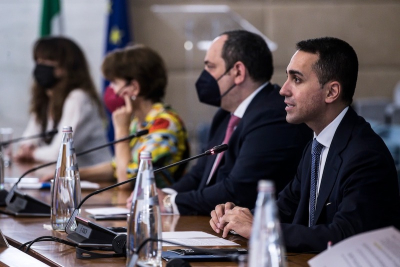 Luigi di Maio, Minister for Foreign Affairs and International Aid (MAECI), declared: “Design, one of the engines of Italy's industrial output, combines the economic, cultural and technological spheres, and represents one of the pillars of the integrated promotion carried out by the MAECI and its network abroad. The Foreign Ministry and Triennale are working side-by-side, as in the case of Italian Design Day, with the aim of increasing and fostering an awareness, outside Italy's borders, of the products of this strategic sector of Italian-made goods, so as to increase its export volumes, as well as to foster an awareness of the tradition of small businesses and manufacturing firms in local areas, and in our industrial districts.”

Dimitri S. Kerkentzes, Secretary General of the BIE stated: “The theme of this 23rd International Exhibition of Triennale Milano is a call to question our assumptions, to embrace the vastness and the uncertainty of the unknown and to set a new direction for humankind. By bringing together various perspectives, cultures, and backgrounds to all look at the same challenge, this International Exhibition will reveal unexpected solutions and stimulate experimentation and innovation.”

Stefano Boeri, President of Triennale Milano, indicated: “The 23rd International Exposition aims to be a platform for dialogue and research, an opportunity for exchanges and encounters involving artists, designers, architects, curators, schools and collectives, as well as cultural institutions, museums and research institutes coming from over 40 countries. This plurality of points of view will allow us to expand our gaze to encompass that which we do not yet know that we don't know. At a time as dramatic and complex as the current time, we believe that it is more important than ever to preserve and promote the exchange of ideas, experiences and reflections between differing countries and differing cultures.”