At the corner of an alley, visitors to Expo Milano 2015 will be surprised to discover some spherical pavilions, a construction model that can be found in the world exhibitions of the last 50 years.

These bubble pavilions are an invention of Buckminster Fuller, (1895-1983) an American mathematician and philosopher who proposed a new concept for human habitation in the 50's : "The geodesic dome", which remains a classic of world's fairs' architecture. These spheres are composed of identical equilateral triangles which provide a very high-rigidity structure for a minimum of materials used. 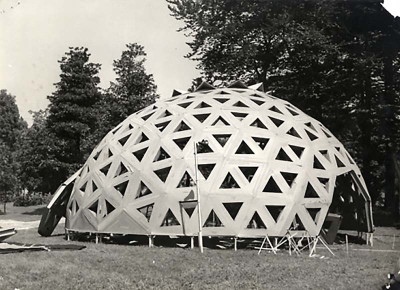 "Cupola Geodetica" made of waterproofed cardboard in 1954

In the 50's, Fuller began working with Roberto Mango an architect with whom he exhibited a "Cupola Geodetica" made of waterproofed cardboard, in Sempione Park, during the Milan Triennale of 1954. Then, for the Triennale of 1957, he designed the US pavillion with another architect - Mc Cobb,. At the same time, Fuller was working with the US Army, designing modular lightweight shelters for US troops. 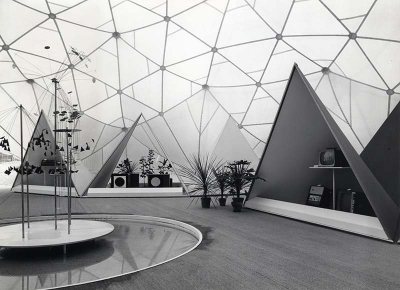 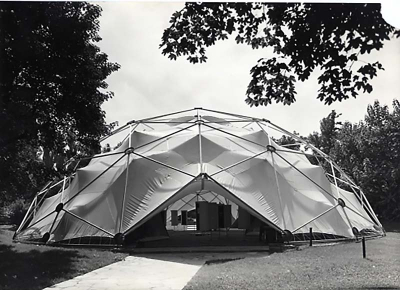 US pavilion in Triennale 1957

In 1964 Fuller created the Fuller & Sadao Inc, a design firm, with the Chinese-American architect Shoji Sadao, whose first project was the huge geodesic dome of the US pavilion for Expo 67 in Montreal. This structure, still in place on the island of St. Helene in Montreal, is now well known as the Biosphere. During the 1967 World Expo, the United States pavilion, which received 53 million visitors, presented on its six floors, "hundreds of artifacts and works of art reflecting the American genius and spacecraft used during the Apollo flights" . With this impressive building, Fuller marked a key moment in the history of contemporary architecture. Such spheres have also been built in other exhibitions such as Osaka 70, Vancouver 86 or Seville 92. 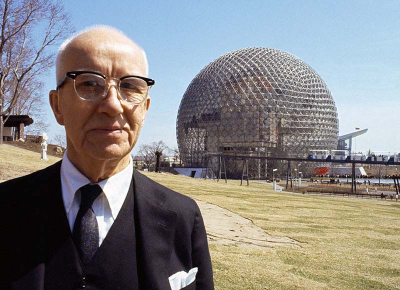 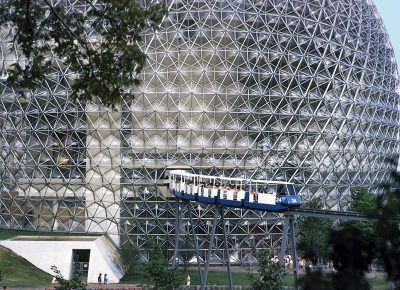 Richard Fuller and the United States pavilion at Expo 1967 Montreal

At Expo Milano 2015 we can see Fuller's legacy in several pavilions. The most obvious example and the boldest is the Belgian pavillion, designed by Patrick Genard & Asociados, in collaboration with the architect Marc Belderbos and the construction contractors Besix Vanhout. The atrium includes an area of culinary discoveries where visitors can relax with a beer, chocolates and speculos biscuits.. Looking up, one can see, that the vault has triangular glass panels, some of which have crystalline photovoltaic cells and others an organic film generating electricity for the building. Another technical achievement of the company AGC Glass Europe is the antibacterial glass which the partitions in the atrium are made of. It is capable of removing 99.9% of the bacteria on its surface. 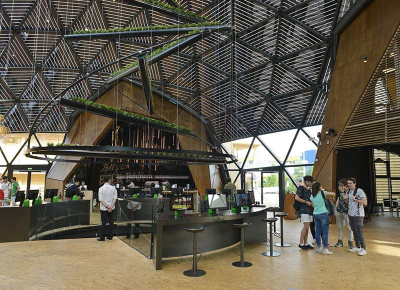 A little further on, the old farm Calcina Trilla is the Civil Society pavilion during Expo Milano 2015, where associations and international organisations present their best practices. The area where forums and meetings are held is protected by the simplest expression of the Fuller invention: a solid, light geometrical structure that is easy to mount. 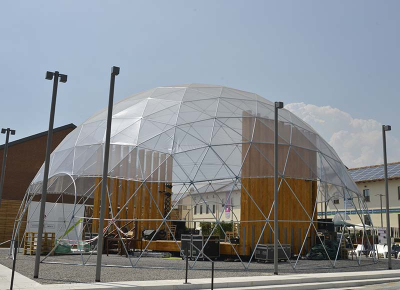 Regarding the Malaysian pavilion, a more liberal artistic interpretation of Fuller's geode has been used by the architects - Hijjas Kasturi Associates. Indeed it is no longer a sphere per se but a seed-shaped pavilion composed of giant triangles that are all different, which, from this point of view is an architectural prowess. By modifying the purely geometrical principle of geodes and softening the lines, the Malaysian pavilion gives way for poetry and for a journey through the main themes of the pavilion. 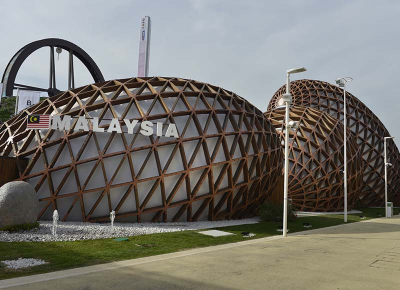 Richard Buckminster Fuller, a poor student in school, expelled twice from Harvard University, penniless during the 1929 crisis, could not have imagined that his work would continue to inspire the pavilions of Expo Milan 2015 and the largest architectural firms of the XXI century.