Preparations for the next World Expo in Dubai are firmly on track, with “structures emerging every day from a site that 18 months ago was literally a desert”, declared the Executive Director of the Expo 2020 Dubai Bureau, Najeeb Mohammed Al-Ali, during his progress report to the 163rd General Assembly of the Bureau International des Expositions (BIE) on 13 June. 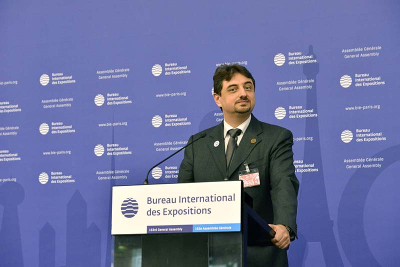 Illustrating this statement, Mr. Al-Ali showed recent drone footage of progress on the 438 ha site, informing Member States that the Organiser is on track to complete the major construction projects – including Al Wasl Plaza, Route 2020 and thematic pavilions – by October 2019, a full year before the Expo opens to the public on 20 October 2020.

More than 170 countries and three multilateral organisations have already confirmed participation in “the first mega-event in the Middle East”, which is being held under the theme “Connecting Minds, Creating the Future”. Highlighting examples of already designed country pavilions, Mr. Al-Ali encouraged participants to focus on the “creation of fun, engaging and empowering content” to showcase what their country has to offer in line with one of the three subthemes of the Expo: Mobility, Sustainability and Opportunity. He reminded Member States that participation is not only about the pavilion and its contents, but also about events and activities, including international engagement.

On this subject, Mr. Al-Ali gave delegates an update of Expo 2020’s Expo Live and Youth Connect programmes, and introduced the “World Majlis” initiative. Inspired by an Emirati tradition, World Majlis are inclusive discussion platforms that bring leaders and citizens together to have “conservations that matter” about pressing global issues. In the UAE and in up to 20 countries around the world, Expo 2020 plans to organise a total of 80 Majlis in the run-up to and during the Expo, with Mr. Al-Ali calling on Member States to express an interest if they would like to host an edition of the Majlis on a particular topic.

The General Assembly also received updates on efforts to promote the next World Expo, with the announcement of four new global partners as well as the launch in early 2018 of the first international marketing campaign. Celebrating the “power of human collaboration”, the campaign has made over 1 billion impressions across the world.

Concluding with a reminder of the Third International Participants Meeting taking place in November 2018, Mr. Al-Ali emphasised the importance of collaboration: “Only together we can make our World Expo an unforgettable experience. And only together we can inspire future generations as we continue to sow the seeds to create a better future.”