The Bureau International des Expositions (BIE) and the Government of the United Arab Emirates (UAE) today signed the Expo 2020 Dubai See Agreement. This agreement aims to facilitate participation at Expo 2020 Dubai by serving as a legal framework to guarantee the privileges and special conditions for official participants in the Expo. 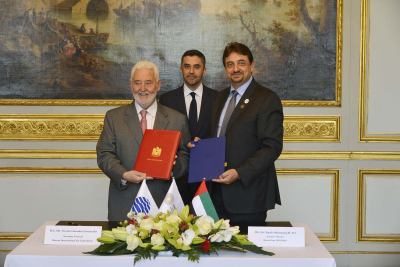 The agreement was signed during a meeting between the Secretary General of the BIE, Vicente G. Loscertales, and Najeeb Mohammed Al Ali, Executive Director of Expo 2020 Dubai Bureau, in the presence of the Ambassador of the UAE to France, H.E. Omar Ghobash.

After the signature, the Secretary General of the BIE commented: “Following the election of the UAE as host country of World Expo 2020 in 2013 and its registration by the General Assembly in 2015, the signing of the See Agreement is a key milestone that strengthens the formal partnership between the BIE and the Government of the UAE and establishes the legal framework for the presence of the participants.” 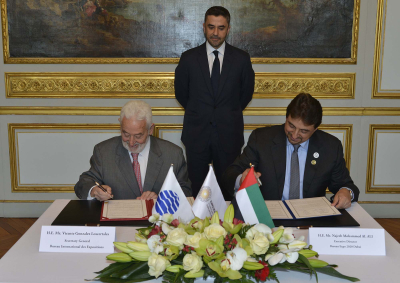 As the host country of the next World Expo, the Government of the UAE commits to create the necessary conditions for the 180 official participants expected to take part in Expo 2020. The timing of the agreement is significant as construction of the first international pavilions is due to begin next month, with many countries having already appointed national commissioners.

The See Agreement – known as Accord de Siège in French – paves the way for the host country of an Expo to create the conditions for international participation, in line with BIE rules. The first such See Agreement was signed with the Government of Spain ahead of Expo 2008 Zaragoza.