The Russian Federation submitted today a letter of candidature to the Bureau International des Expositions (BIE) to organise World Expo 2030 in Moscow.

The letter, from the Prime Minister of Russia, Mikhail Mishustin, was handed to the Secretary General of the BIE, Dimitri S. Kerkentzes, by the Deputy Minister of Industry and Trade, Alexey Gruzdev, and the Ambassador of Russia to France, Alexey Mechkov. 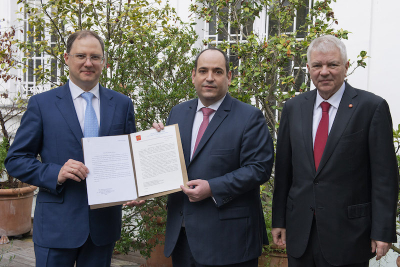 Russia’s candidature is based on the theme “Human Progress: A Shared Vision for a World of Harmony”, and if successful, the Expo would take place in Russia’s capital, Moscow, between 27 April and 27 October 2030.

As this is the first candidature submitted to the BIE to host World Expo 2030, a six-month countdown is now enacted during which all other countries wishing to organise World Expo 2030 may notify the BIE of their candidature. At the end of this candidature phase – on 29 October 2021 at 5pm CET – the BIE will close the candidate list. 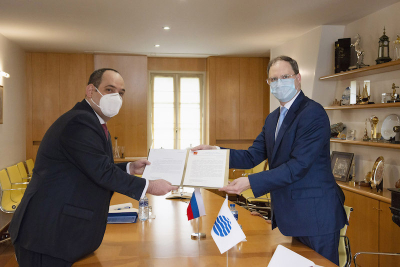 Once the list is closed, the project examination phase of the candidature process will be launched, during which each candidate will submit a detailed candidature dossier. The BIE will then organise Enquiry Missions and assess the feasibility and viability of each candidature project. The host country of World Expo 2030 will then be elected by the 169 Member States of the BIE gathered in a General Assembly.

The Secretary General of the BIE, Dimitri S. Kerkentzes stated: “By receiving this candidature from the Russian Federation, the BIE is pleased to launch the World Expo 2030 candidature process, with the candidature phase to remain open for six months. As Expo 2020 Dubai gets ready to open this year, and with preparations for Expo 2025 Osaka Kansai well underway, the interest in World Expo 2030 is a strong signal that humanity is always looking ahead to the future with a sense of optimism and progress. This passion and drive testify to the appetite, felt around the world, for meaningful and shared experiences that bring us closer.”

Russia is an active and engaged Member State of the BIE and participates regularly in World and Specialised Expos; its participation has been rewarded on several occasions including at World Expo 2010 Shanghai and World Expo 2015 Milan.