The four countries that have submitted candidature dossiers to organise World Expo 2030 – Ukraine (for Odesa), the Kingdom of Saudi Arabia (for Riyadh), the Republic of Korea (for Busan) and Italy (for Rome) - presented their Expo visions during the 171st General Assembly of the Bureau International des Expositions (BIE), which took place in Paris on 28-29 November. 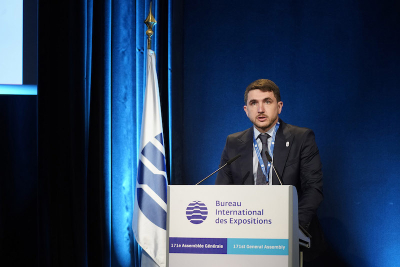 Ukraine’s project to organise World Expo 2030 in Odesa was introduced by the President of Ukraine, Volodymyr Zelenskyy, who delivered a video address to the General Assembly indicating that Odesa, “the city of diversity”, would be the ideal host city for the first World Expo in Eastern Europe. The proposed theme, “Renaissance. Technology. Future.” was then elaborated by the Deputy head of the Odesa Regional State Administration, Roman Grygoryshyn, and Jaanika Merilo, Adviser to the Deputy Prime Minister - Minister of Digital Transformation, who told Member States about a “vision for the future where all the new technologies will be to serve, help and educate people”. Architect Manuela Gatto of Zaha Hadid Architects then presented an overview of the proposed Master Plan, which would see pavilions created from modular blocks that can be easily transported and reused after the Expo.

In a video message to the 171st General Assembly of the BIE, the President of Ukraine @ZelenskyyUa emphasises that the candidature to
organise World #Expo2030 in Odesa aims to “show what humanity
can do in Ukraine when all peoples cooperate for peace and safety” #BIE171 pic.twitter.com/vJef0tgfdY 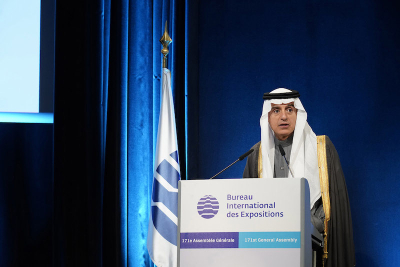 The CEO of the Royal Commission for Riyadh City, H.E. Fahd Al-Rasheed, introduced the candidature to organise World Expo 2030 in Riyadh with the proposed theme “The Era of Change: Together for a Foresighted Tomorrow”. The idea of this theme was further developed by the Minister of Communications & Information Technology H.E. Abdullah Al-Swaha, and the Minister of State for Foreign Affairs, H.E. Adel A. Al-Jubeir, with the latter telling Member States that the plan for the Expo is “to leave a powerful legacy and a clear demonstration that a brighter, sustainable future is achievable by all nations, and by all people”. Concluding the presentation, H.H. Princess Haifa Al-Mogrin, Permanent Delegate to UNESCO, affirmed that the Kingdom “looks forward to creating an Expo 2030 that can draw the blueprints of a new, ambitious and more equitable future”.

For KSA Minister of State @AdelAljubeir, the task is "to reverse more than a century of negative trends and work together towards creating a better future”, with #Expo2030 in Riyadh planning to be a “clear demonstration that a brighter, sustainable future is possible” #BIE171 pic.twitter.com/PnSCHkz07o 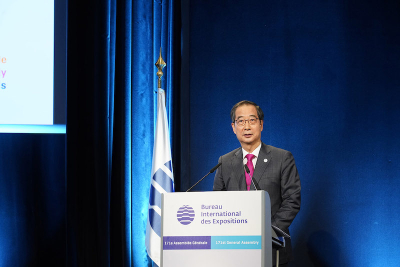 The presentation of the Republic of Korea’s project to organise World Expo 2030 in Busan began with a video featuring Honorary Ambassadors for the candidature, BTS, whose members called on people “to work together and act together to face our shared challenges”. The proposed theme, “Transforming Our World, Navigating Toward a Better Future” was explored further by climate science professor June-yi Lee, while businesswoman Sung-un Chang and youth ambassador Asia Campbell elaborated on the Expo’s ambition to be a “platform for change”. The final speaker to take the stage was the Prime Minister of the Republic of Korea, Duck-soo Han, who announced the launch of the ‘Busan Initiative’ partnership programme, and declared that Expo 2030 in Busan would “present a new kind of Expo, a sustainable platform for all humanity to resolve our shared challenges together”.

Supporting the Republic of Korea’s 🇰🇷 candidature to host World #Expo2030 in Busan, @BTS_twt invite everyone “to work together and act together to face our shared challenges…because our best moment is yet to come” #BIE171 pic.twitter.com/pFdqWNNpqg 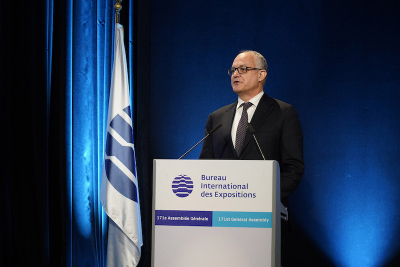 Italy’s project to organise World Expo 2030 in Rome was introduced by Rebecca Bianchi, prima ballerina of Rome’s Teatro dell’Opera, who emphasised that just like culture, art and beauty, the proposed theme “People and Territories: Regeneration, Inclusion and Innovation” aims to unite. Support for the Expo candidature was underlined by 8-year-old schoolgirl Elisa Pasquini and, via a video message, by the Former Foreign Minister of Argentina Susan Malcorra. The concept of the Expo project was presented to Member States by architect Matteo Gatto, and the Government’s support for the project was underlined in a video address by Antonio Tajani, the Minister of Foreign Affairs. Concluding the presentation, the Mayor of Rome, Roberto Gualtieri, declared that the Expo would be “driven…by shared values on which to build a future of peace, prosperity, and brotherhood”.

Italy’s 🇮🇹 candidature for #Expo2030 in Rome proposes discussions that would be “both inclusive and innovative”, with “no limits or boundaries” to the thoughts & contributions #BIE171 pic.twitter.com/b9WHxqCBOc

With the four candidates having submitted dossiers detailing their candidature projects on 7 September, the BIE will organise Enquiry Missions to each candidate country in early 2023 in order to assess the feasibility and viability of the projects. The election of the host country is due to take place during the 173rd General Assembly of the BIE set to take place in November 2023.