The United States of America submitted today a letter of candidature to the Bureau International des Expositions (BIE) to organise a Specialised Expo in the State of Minnesota in 2027.

The letter, from Secretary of State Antony J. Blinken, was handed to the Secretary General of the BIE, Dimitri S. Kerkentzes, by Brian Aggeler, Chargé d’Affaires a.i. of the U.S. Embassy in Paris.

The United States’ candidature is based on the theme “Healthy People, Healthy Planet: Wellness and Well-Being for All”, and if successful, the Expo would take place in Minnesota, between 15 May and 15 August 2027. 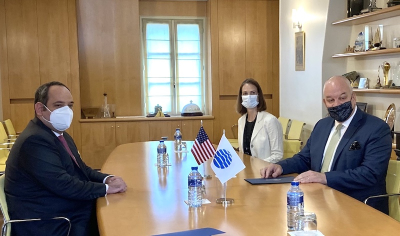 Once the list is closed, the project examination phase of the candidature process will be launched, during which each candidate will submit a detailed candidature dossier. The BIE will then organise Enquiry Missions and assess the feasibility and viability of each candidature project. The host country of Specialised Expo 2027/28 will then be elected by the 169 Member States of the BIE gathered in a General Assembly. 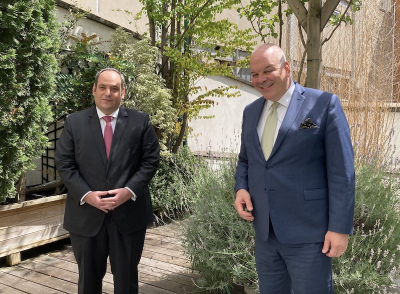 The Secretary General of the BIE, Dimitri S. Kerkentzes declared: “With this letter of candidature from the United States, the BIE is pleased to launch the candidature process for Specialised Expo 2027/28, which gives other interested countries six months to submit their candidature before the candidate list is closed. The strength of Specialised Expos lies in their capacity to focus global attention on a particular topic of international relevance, and to seek a global response to a precise issue. I am looking forward to knowing more about the United States’ proposed theme.”

The United States is an active and engaged Member State of the BIE and has been the host country of multiple Expos ranging from World Expo 1876 Philadelphia to Specialised Expo 1984 New Orleans. It participates regularly in World and Specialised Expos and has been recognised for the quality of its participation.

Expos - also known in the United States as "World's Fairs" - are global events that explore a chosen theme through engaging and immersive discoveries. Among the different categories of Expos, Specialised Expos are global events designed to respond to a precise challenge facing humanity and may take place in the interval between two World Expos. Specialised Expos are limited in terms of duration - lasting up to three months - and space - with the site not exceeding 25 hectares. The exhibition site is entirely built by the Organiser, Participants being provided with pavilion space.