Thailand submitted today a letter of candidature to the Bureau International des Expositions (BIE) to organise a Specialised Expo in Phuket in 2028.

The letter, from Anutin Charnvirakul, Deputy Prime Minister of Thailand, was handed to the Secretary General of the BIE, Dimitri S. Kerkentzes, by H.E. Sarun Charoensuwan, Ambassador of Thailand to France. 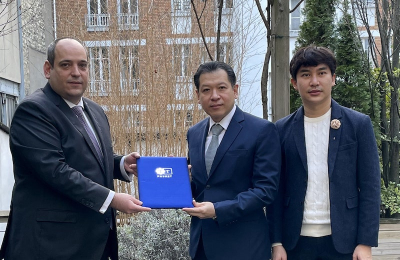 Thailand’s candidature is based on the theme “Future of Life: Living in Harmony, Sharing Prosperity”, and if successful, the Expo would take place in Phuket between 20 March and 17 June 2028.

Thailand’s candidature follows the United States’ candidature, submitted on 29 July 2021, which opened the six-month window during which any other countries wishing to organise a Specialised Expo in 2027 or 2028 may notify the BIE of their candidature. At the end of this candidature phase – on 28 January 2022 at 5pm CET – the BIE will close the candidate list. 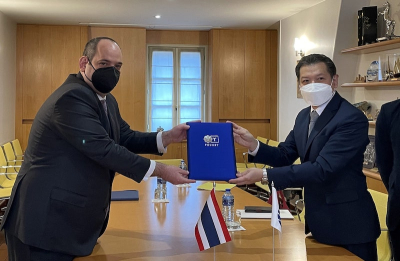 The Secretary General of the BIE, Dimitri S. Kerkentzes declared: “The BIE is pleased to receive Thailand’s letter of candidature to organise a Specialised Expo in Phuket. This second candidature attests to the role of Specialised Expos in generating fruitful discussion and global action around themes addressing specific challenges facing humanity.”

Thailand has been a member of the BIE since 1993, but its involvement in Expos dates as far back as 1862, when the Kingdom sent a delegation to the World Expo in London. Since then, the country’s participation in World Expos, Specialised Expos and Horticultural Expos has been continuous, with the Thai pavilion receiving an award for its theme development at Expo 2008 in Zaragoza. Thailand organised Horticultural Expo 2006-7 – Royal Flora Ratchapruek – in the city of Chiang Mai.

Expos are global events that explore a chosen theme through engaging and immersive discoveries. Among the different categories of Expos, Specialised Expos are designed to respond to a precise challenge facing humanity and may take place in the interval between two World Expos. Specialised Expos are limited in terms of duration - lasting up to three months - and space - with the site not exceeding 25 hectares. The exhibition site is entirely built by the Organiser, Participants being provided with pavilion space.