During the 171st General Assembly of the Bureau International des Expositions (BIE), which took place in Paris on 28-29 November, Member States approved the list of candidates to be put forward for the election of the host of Specialised Expo 2027/28. This decision was based on the findings of the Enquiry Missions carried out between July and October 2022, which found the project of the five candidates to be viable and in line with BIE rules.

Following the decision, each candidate – Serbia (for Belgrade), Spain (for Malaga), Argentina (for Bariloche), the United States (for Minnesota), and Thailand (for Phuket) – presented their projects to the General Assembly. With the election of the host country taking place during the next General Assembly – set to take place in June 2023 – candidates will only have one more opportunity to lay out their vision for the next Specialised Expo. 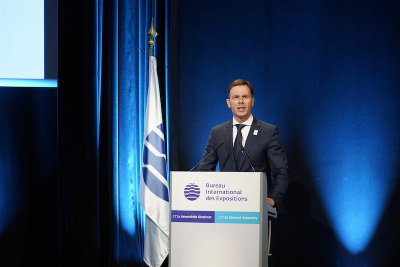 Introducing Serbia’s candidature to organise a Specialised Expo in Belgrade in 2027, the Deputy Prime Minister and Minister of Finance Siniša Mali underlined the “commitment at the highest level” for the Expo project, and emphasised that “Serbia and Belgrade are a desirable meeting point between East and West”. The Minister of Sport, Zoran Gajić, then addressed the relevance of the proposed theme “Play for Humanity - Sport and Music for All”, indicating that “the power of play, the importance of sports and music are woven into the global collective heritage”. The Expo’s vision was then discussed during a panel discussion with the participation of the CEO of Serbia Convention Bureau, Dušan Borovčanin, actor Predrag Miki Manojlović, violinist Stefan Milenković, and urbanist Marko Stojčić, with tennis player Novac Djokovic making a video appearance to underline his support for the candidature.

Serbia’s delegation informs #BIE171 that the project to organise Specialised Expo 2027 in Belgrade forms part of a larger Master Plan including a new stadium, and that the site will give a lot of space to international participants pic.twitter.com/bWOh7RTdW8 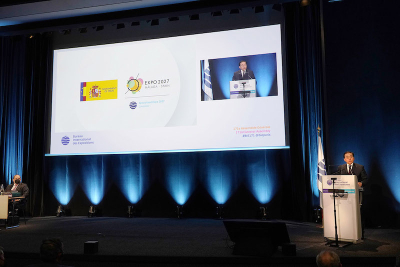 The Minister of Foreign Affairs of Spain, José Manuel Albares, took the floor to present Spain’s candidature to organise a Specialised Expo in Malaga in 2027, emphasizing that the project has the support from across the political spectrum and civil society. The proposed theme, “The Urban Era: towards the Sustainable City”, puts Spain in a position to offer “an extraordinarily unique opportunity to share best practices from cities around the globe from both the developed and less developed regions of the world”, indicated the Mayor of Malaga, Francisco de la Torre. The President of the Regional Government of Andalusia, Juan Manuel Moreno, actor Antonio Banderas and tennis player Rafael Nadal also took part in the presentation by expressing their support for the Expo and its theme via video messages to the General Assembly.

The BIE General Assembly is told that the project to organise Specialised Expo 2027 in Malaga foresees an Expo site based around a unique ring-shaped building that would serve as the basis for a “friendly and inviting eco-neighbourhood” #BIE171 pic.twitter.com/wDGItqhwre 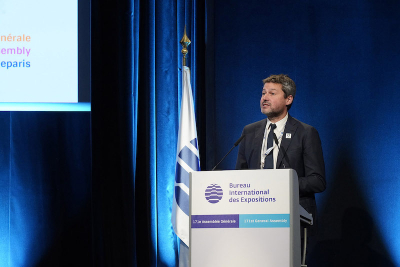 Argentina’s candidature to organise a Specialised Expo in San Carlos de Bariloche in 2027 was introduced by the Bid Committee Executive Director, Luciana Grosman, who presented the proposed theme “Nature + Technology = Sustainable Energy. A viable future for humanity”. The Governor of the Province of Rio Negro, Arabela Carreras, and the Mayor of Bariloche, Gustavo Gennuso, both addressed Member States to underline their support for the project, and outlined its planned legacy, which includes a ‘City of Knowledge and Productive Development’. The natural, manmade and human assets of the candidate city and region were then put forward by Argentina’s Minister of Tourism and Sports , Matías Lammens, who declared that “the city of Bariloche has all the attributes necessary to host this global event”, before the Minister of Economy, Sergio Massa, sent underlining the Government’s enthusiasm for the Expo project via video message.

Argentina’s project for Specialised Expo 2027 foresees the creation of a “City of Knowledge and Productive Development” in Bariloche, “the heart of Argentinian Patagonia”, BIE Member States are told #BIE171 pic.twitter.com/tsuL6WQTN0 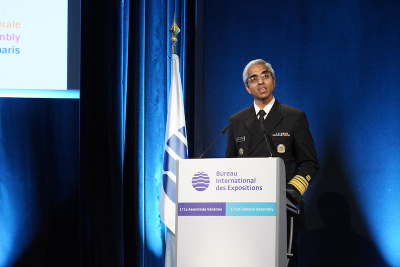 The presentation of the United States’ candidature to host a Specialised Expo in Minnesota in 2027 was introduced by Jack Markell, the U.S. Ambassador to the OECD, and by First Lady Dr. Jill Biden, who addressed the General Assembly in a video message. The importance of the proposed theme, “Healthy People, Healthy Planet: Wellness and Well-Being for All” was underlined by the U.S. Surgeon General, Dr. Vivek Murthy, who indicated that “there could not be a more important moment to mobilise the world around the vision of better health for individuals, communities, and the planet.” Dr. Archelle Georgiou of Starkey Hearing Technologies then presented Member States with some of the thematic topics that the Expo would aim to raise, sharing renderings of how the Expo may look and a series of videos offering different perspectives on health and well-being, before concluding remarks were made by theme leader Patty Simmons.

The project for Specialised Expo 2027 in Minnesota will aim to inspire visitors about the “Healthy People, Healthy Planet: Wellness and Well-Being for All” theme by offering high-tech and immersive experiences, BIE Member States are told #BIE171 pic.twitter.com/HoqHuudFni 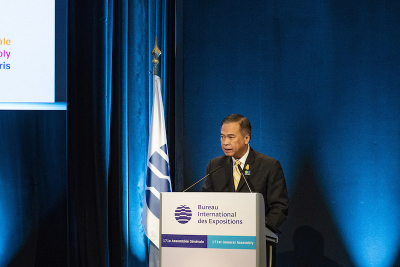 Introducing Thailand’s candidature to organise a Specialised Expo in Phuket in 2028, the Prime Minister of Thailand, Prayut Chan-o-cha addressed the General Assembly via video message during which he reaffirmed the country’s ambition to organise the Expo “to advocate innovative and collaborative solutions to challenges facing People, Planet and Prosperity.” Phuket Young Ambassador, the 12-year-old Annada Lakkhana, then called on “coming together in unity” for future generations in line with the proposed theme “Future of Life: Living in Harmony, Sharing Prosperity”. The overall project and Master Plan were further elaborated by the President of TCEB, Chiruit Isarangkun Na Ayuthaya and architect Yossapon Boonsom. The presentation was concluded by the Vice Minister for Foreign Affairs Vijavat Isarabhakdi, who underlined that the Expo in Phuket would “offer unique opportunities for collaboration, dialogue, network-building, and knowledge-sharing”.

BIE Member States are told that Thailand’s concept for Specialised Expo 2028 in Phuket is to organise “the first Expo in the forest”, with the development of the site to include reforesting, the restoration of natural waterways and swamps, and self-sustaining buildings #BIE171 pic.twitter.com/ENWPx6Tfe4