The Bureau International des Expositions (BIE) will carry out Enquiry Missions to the five countries seeking to organise Specialised Expo 2027/28 between July and October 2022.

The Enquiry Missions – composed of one of the Vice Presidents of the BIE, delegates of BIE Member States and the BIE Secretary General – will travel to the United States, Thailand, Serbia, Spain and Argentina as part of the project examination phase for Specialised Expo 2027/28. 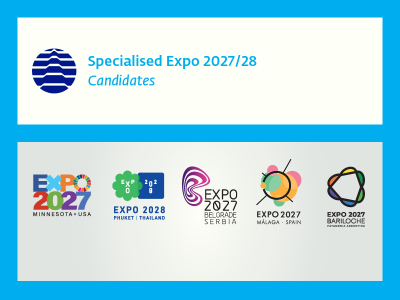 The dates of the Enquiry Missions are as follows:

The task of the Enquiry Missions is to assess the feasibility and viability of each Expo project as laid out in the candidature dossiers previously submitted to the BIE. This assessment, which is a necessary step for the candidature to be considered for election, includes detailed presentations of the candidature project and exchanges with officials and key stakeholders involved in the candidature.

Using the candidature dossier as a guide, each Enquiry Mission will look into the motivations behind the Expo candidature, the attractiveness of the proposed Expo theme, the proposed site and its planned re-use after the Expo, levels of local and national support for the project, expected participation, and the financial feasibility plan.

The findings of the Enquiry Missions will be discussed by the BIE’s Executive Committee in October 2022, which will decide to retain the candidatures it considers to be feasible and viable. In June 2023, during the 172nd General Assembly of the BIE, the host country of Specialised Expo 2027/28 will be elected by BIE Member States, via secret ballot, on the principle of one country one vote.