The five countries seeking to host a Specialised Expo in 2027 or 2028 – Thailand, Serbia, Spain, Argentina and the United States - presented their different visions for the next Specialised Expo during the 170th General Assembly of the Bureau International des Expositions (BIE) in Paris on 20 June. Coming two weeks after the submission of the candidature dossiers detailing each project, it marked the first time that all Candidates presented to BIE Member States. 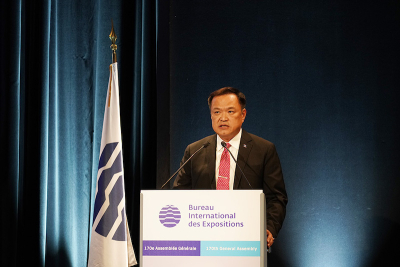 Thailand was the first Candidate to present to Member States, with its project to organise the next Specialised Expo in Phuket in 2028. The Expo project based around the theme “Future of Life: Living in Harmony, Sharing Prosperity was presented by the President of Phuket Tourism Association, Bhummikitti Ruktaengam, and the Deputy Prime Minister and Minister of Public Health of Thailand, Anutin Charnvirakul.

Thailand’s candidature to organise Specialised Expo 2027/28 in Phuket is based on the theme “Future of Life: Living in Harmony, Sharing Prosperity”, with the goal to “restart hope of harmony and prosperity for next generations to come” #BIE170 pic.twitter.com/rXBIRrs5LG 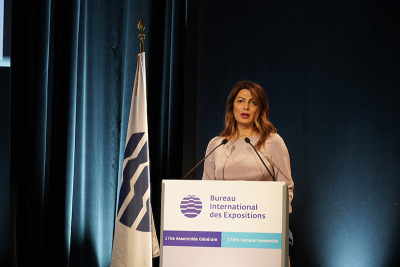 Serbia then presented its candidature project to organise the next Specialised Expo in 2027 in Belgrade under the theme “Play for Humanity – Sport and Music for All”. The Minister of Tourism, Trade and Telecommunication, Tatjana Matic addressed BIE Member States before giving the floor to the President of Serbia’s Chamber of Commerce and Industry, Marko Čadež and Expo Candidature Project Manager Dusan Borovcanin. The Prime Minister of Serbia Ana Brnabic, the Minister of Finance Sinisa Mali, and the Chief Urbanist of Belgrade Marko Stojcic, also delivered video messages to the General Assembly.

Member States of the BIE are told by Serbia’s delegation to #BIE170 that “dynamic” Belgrade, as a meeting place of East and West, is “the perfect place to host Specialised Expo 2027” pic.twitter.com/8Jq4Q8tTig

Spain’s project to organise the next Specialised Expo in Malaga in 2027 under the theme “The Urban Era: towards the Sustainable City” was introduced by Spain’s Minister for Transport, Mobility and Urban Agenda, Raquel Sánchez, with the Mayor of Malaga, Francisco de la Torre and the President of the Province of Malaga, Francisco Salado presenting further details about the candidature. The Acting President of the Regional Government of Andalusia, Juan Manuel Moreno, also appealed to BIE Delegates via video message.

BIE Member States are introduced to the proposed site for Specialised Expo 2027 in Malaga, located in the “dynamic & thriving” Costa del Sol, which attracts millions of tourists every year #BIE170 @malaga_2027 pic.twitter.com/LWwUfOoP6f 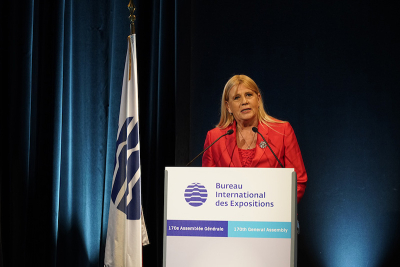 Argentina’s candidature is to organise the next Specialised Expo in San Carlos de Bariloche in 2027 with the theme “Nature + Technology = Sustainable Energy. A viable future for humanity” was presented by the Mayor of San Carlos de Bariloche, Gustavo Gennuso alongside Argentina’s Ambassador to UNESCO, H.E. Marcela Losardo, and the Executive Director of the Cordillera Development Agency, Laura Totonelli. Video messages were also presented to Delegates by the Minister of Foreign Affairs, International Trade and Worship, Santiago Cafiero, and by the Governor of Río Negro, Arabela Carreras.

#BIE170 is told that Bariloche stands for “Plan B to build a new beginning”, with the Expo project rooted in the concept of “Nature + Technology = A new beginning” pic.twitter.com/nIjdmrr5JJ 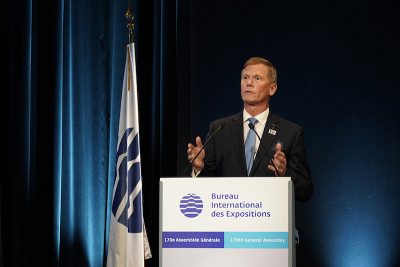 The United States’ delegation was the last to take the floor, presenting BIE Delegates with the project to organise the next Specialised Expo in Minnesota in 2027 under the theme “Healthy People, Healthy Planet: Wellness and Well-Being for All”. The Chargé d’Affaires of the United States Embassy in France, Brian Aggeler introduced the presenters, which included the Chairman of the Board of the Candidature Committee Bob Clark, the Mayor of Bloomington Tim Busse, Senior Advisor for the Candidature David Loehr, Ecolabs Vice President Sam DeBoo and the President and CEO of the Candidature Committee John Stanoch. The General Assembly was also shown a video message from Dr. Jakub Tolar, Dean of the Medical School of the University of Minnesota.

The USA’s proposed theme for Specialised Expo 2027 in Minnesota, “Healthy People, Healthy Planet: Wellness and Well-Being for All”, is based on the understanding that “healthy populations depend on access to resources that only a healthy planet can provide” #BIE170 @usaexpo2027 pic.twitter.com/rSSCDaVlem

The next step in the candidature process for Specialised Expo 2027/28 is the organisation of Enquiry Missions, which will be carried out in each candidate country between July and October 2022.

At the end of the project examination phase, BIE Member States, on the principle of one country one vote, will elect the Specialised Expo 2027/28 host country by secret ballot during the 172nd General Assembly of the BIE, set to take place in June 2023.