Having reviewed the reports of the Enquiry Missions that took place in Thailand, Argentina, Serbia, Spain and the United States, the Executive Committee of the Bureau International des Expositions (BIE) concludes that all five candidatures for Specialised Expo 2027/28 are feasible, viable, and in line with BIE rules. The Committee recommends that the five candidates be taken into consideration for election by BIE Member States. 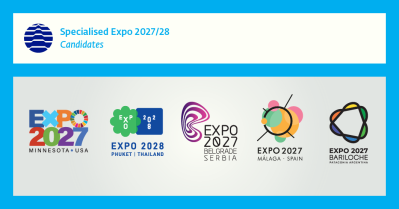 These recommendations are based on the reports of the Enquiry Missions that were carried out by the BIE between July and October of this year, to Thailand (Phuket), Argentina (Bariloche), Serbia (Belgrade), Spain (Malaga) and the United States (Minnesota), aimed at assessing the feasibility and viability of each Expo project.

During each Enquiry Mission, BIE representatives – led by the President of the BIE Executive Committee, and including Delegates of BIE Member States and the BIE Secretary General – exchanged with national and local officials, representatives of the business community and civil society, and visited the proposed Expo site.

Using the candidature dossiers submitted to the BIE on 7 June 2022 as a guide, each Enquiry Mission looked into the motivations behind the Expo candidature, the attractiveness of the proposed Expo theme, the proposed site and its planned re-use after the Expo, levels of local and national support for the project, expected participation, and the financial feasibility plan

Members of the Executive Committee, having analysed and discussed each Enquiry Mission report, unanimously agreed that all five candidature projects are considered feasible, viable, and in line with BIE rules.

The President of the Executive Committee will therefore recommend to the 171st General Assembly of the BIE, taking place in Paris on 28-29 November, that all candidature projects be considered for election.

The host country of the next Specialised Expo will be elected in June 2023, during the 172nd General Assembly of the BIE, when Member States will vote via secret ballot on the principle of one country, one vote

Thailand’s candidature is for a Specialised Expo in Phuket between 20 March and 17 June 2028 under the theme “Future of Life: Living in Harmony, Sharing Prosperity”.

Argentina’s candidature is for a Specialised Expo in San Carlos de Bariloche between 1 February and 30 April 2027 under the theme “Nature + Technology = Sustainable Energy. A viable future for humanity”.

Serbia’s candidature is for a Specialised Expo in Belgrade between 15 May and 15 August 2027 under the theme “Play for Humanity: Sport and Music for All”.

Spain’s candidature is for a Specialised Expo in Malaga between 5 June and 5 September 2027 under the theme “The Urban Era: towards the Sustainable City”.

The United States’ candidature is for a Specialised Expo in Minnesota between 15 May and 15 August 2027 under the theme “Healthy People, Healthy Planet: Wellness and Well-Being for All”.