Representatives of the Bureau International des Expositions (BIE) have completed their Enquiry Mission as part of the examination of Argentina’s candidature to organise a Specialised Expo in San Carlos de Bariloche in 2027 under the theme “Nature + Technology = Sustainable Energy. A viable future for humanity”.

Members of the Enquiry Mission, led by the President of the BIE Executive Committee, Alain Berger, looked into all aspects of the Expo project submitted by Argentina and laid out in its candidature dossier. The delegation was composed of Delegates of three BIE Member States, and the Secretary General of the BIE, Dimitri S. Kerkentzes, and was accompanied by BIE officials. 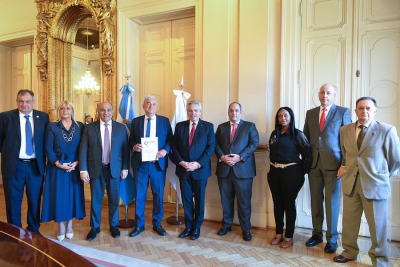 Over the course of five days, Members of the Enquiry Mission received detailed presentations of the candidature project, visited the proposed Expo site, and exchanged with national and local officials, as well as representatives of the business community and members of civil society.

Having arrived in Buenos Aires on 29 August, Members of the Enquiry Mission met with the President of the Argentine Nation, Alberto Fernández, with Cabinet Ministers including the Minister for Foreign Affairs, International Trade and Worship, Santiago Cafiero, and with Members of the National Congress. The delegation travelled to San Carlos de Bariloche on 30 August, where they were received by the Governor of Río Negro Province, Arabela Carreras, and the Mayor of San Carlos de Bariloche, Gustavo Gennuso. They also met with the Minister of Tourism and Sport, Matías Lammens, and the Minister of Tourism and Sport of Río Negro Province, Martha Velez. 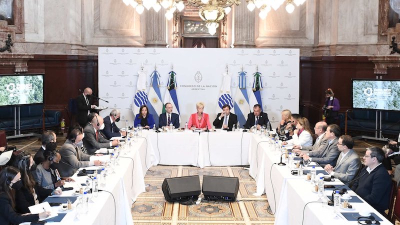 The candidature dossier submitted by Argentina outlines a vision for a Specialised Expo to progress towards a “new beginning” with human energy at its centre, occupying its place in nature while generating technologies to advance quality of life. The Expo would be held between 1 February and 30 April 2027 on a site located on Argentina’s National Route 40 within the Bariloche Technological Park to the east of the city. The candidature committee forecasts that 85 countries, in addition to international organisations and NGOs, would participate in the Expo and that it would receive 4.3 million visits during its three-month opening period.

The Enquiry Mission to Argentina is the second of five being carried out as part of the project evaluation phase for Specialised Expo 2027/28. The first, to Thailand, took place in July 2022, and the others – to Serbia, Spain and the United States – will take place over the next two months. The findings of the Enquiry Missions will be discussed by the BIE’s Executive Committee in October 2022, which will decide to retain the candidatures it considers to be feasible and viable. In June 2023 during the 172nd General Assembly of the BIE, the host country of Specialised Expo 2027/28 will be elected via secret ballot by BIE Member States, on the principle of one country one vote.