Three countries are in the running to host World Expo 2025: Japan (Osaka), the Russian Federation (Ekaterinburg) and the Republic of Azerbaijan (Baku). 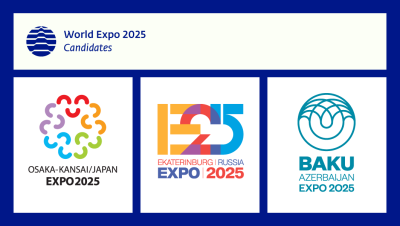 The host country will be elected by the Member States of the Bureau International des Expositions (BIE) during the Organisation’s 164th General Assembly, taking place in Paris on the afternoon of 23 November.

On the morning of 23 November, each of the three candidates will make final presentations of their Expo projects to the 164th General Assembly of the BIE. Eligible and present Member States of the BIE, represented by government-appointed delegates, will then vote for the World Expo 2025 host country in the afternoon. Each Member State has one vote, in a secret ballot using electronic voting.

In the first round of voting, a candidate must gather two-thirds of votes cast to be elected. If no candidate is elected outright, the two candidates with the most votes will immediately move into a second round, where the candidate with the majority of votes cast will obtain the right to host World Expo 2025.