This is Minister Inoue’s first international trip since taking office as Expo Minister, and his first face-to-face meeting with the BIE Secretary General following the Registration of Expo 2025 Osaka Kansai during the BIE’s 167th General Assembly in December 2020. 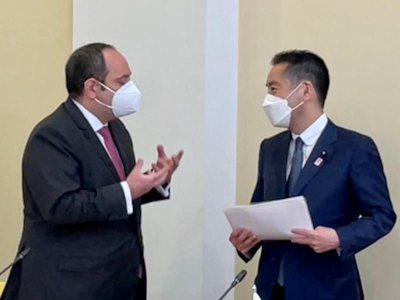 The two sides notably discussed the invitation of international participants, with the Minister emphasising the Government of Japan’s willingness to confirm participation as early as possible to ensure smooth preparations, which the Secretary General fully supports. A total of 48 countries and five international organisations have so far announced their intention to participate in Expo 2025 Osaka Kansai, with the United States and the Republic of Korea being the latest countries to confirm.

The meeting was also an opportunity to review progress on the Expo site and the development of the theme, “Designing Future Society for Our Lives”. Minister Inoue reiterated the commitment of Japan’s Government, as well as private sector and local actors, to make Expo 2025 a “People’s Living Lab”.

Following the meeting, the BIE Secretary General indicated: “The unprecedented challenges of the Covid-19 pandemic have shown just how interconnected and interdependent we are, shedding new light on the role of Expo 2025 Osaka Kansai and its theme. Japan is making strong progress in Expo preparations and with less than four years to go, the growing number of participants demonstrates the scale of our shared ambition for this international gathering.”

World Expo 2025 Osaka Kansai will take place on a 155-ha site in Yumeshima Island between 13 April and 13 October 2025. The Expo will address the achievement of the Sustainable Development Goals (SDGs) under the theme “Designing Future Society for Our Lives”, with its three subthemes being Saving Lives, Empowering Lives and Connecting Lives.