On 28 May, a delegation representing World Expo 2025 Osaka Kansai addressed the 165th General Assembly of the Bureau International des Expositions (BIE) to report on the Expo’s preparations. This was the first presentation to Member States since Japan was elected host country of World Expo 2025 during the 164th General Assembly on 23 November 2018. 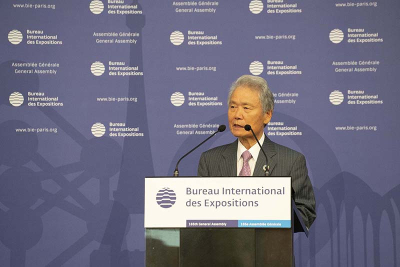 Sadayuki Sakakibara, the newly appointed Ambassador for Expo 2025 Osaka Kansai, informed delegates that the Japanese Government is taking all appropriate legal and institutional measures to ensure the successful organisation of the World Expo. This notably includes the adoption of an Expo Support Act allowing the designation of the official Organising body – the Japan Association for World Expo 2025 - as well as the appointment of a Minister responsible for the Expo. 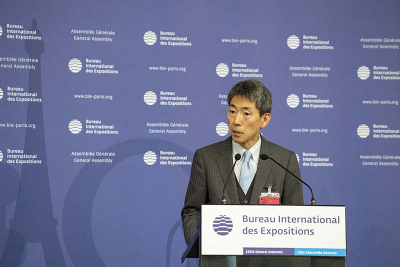 Mr. Sakikabara added that the Government is actively working on the Registration Dossier and plans to submit it to the BIE before the end of 2019. This document will feature detailed plans about the Expo site, its development, international participation, and its theme – “Designing Future Society for Our Lives”.

The theme is already being further developed by Expo 2025 Osaka Kansai, which is gathering ideas from around the world in the achievement of the Sustainable Development Goals (SDGs). To facilitate this collaborative initiative, a new online platform has been launched to collect proposals and discussion points from all those who wish to contribute.

On Yumeshima Island, preparations are also taking place in the development of the Expo site. Junichiro Kuroda, Deputy Director General for World Expo 2025 at Japan’s Ministry of Economy, Trade and Industry (METI), informed delegates that work on a train line extension to connect the island began in April 2019. He added that additional reclamation works have also started, and that progress will follow a planned schedule, with international participants to have access to plots from May 2023, two years before the opening of the Expo.