Japan hosted yesterday an ‘International Forum on Co-creation for the UN Sustainable Development Goals’, as part of its candidature for World Expo 2025.

The forum, which took place in Paris, aimed to familiarise delegates of BIE Member States with Japan’s proposed theme for Expo 2025 in Osaka, “Designing Future Society for Our Lives”. 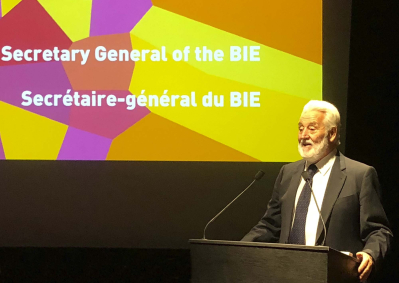 Speaking at the opening of the symposium, the Secretary General of the Bureau International des Expositions (BIE), Vicente G. Loscertales, underlined the role of World Expos as unique platforms to “present the sum of human knowledge, anticipate challenges, and foster a context of cooperation.” With regard to the theme selected by Japan for World Expo 2025, the Secretary General added: “building future society means reconciling technological innovation with human aspirations for environmental preservation, security, justice and equality. It means reimagining the individual, the collective and the global, and all that unites them.”

Guests at the forum were introduced to the theme by Yoshihiro Seki, State Minister of Economy, Trade and Industry of Japan. Mr. Seki indicated that Expo 2025 in Osaka would “aim to be a platform to help achieve the UN’s Sustainable Development Goals within three specific areas: saving lives, empowering lives, and connecting lives.”

The future legacy of World Expos was the focus of a panel discussion including business, political and media representatives. This was followed by a presentation by WAKAZO, a Japanese youth advocacy group that aims to create its own pavilion, should World Expo 2025 take place in Osaka, to represent young people’s ideas for designing a future society, with the aim of helping achieve the UN’s Sustainable Development Goals. 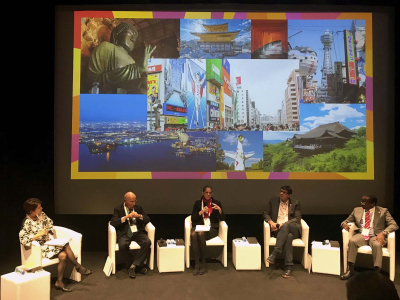 Following an overview of the proposed site plan for Expo 2025 Osaka, the Chairman of the Osaka Chamber of Commerce and Industry, Hiroshi Ozaki, made closing remarks, stating that Osaka would be "an ideal venue for hosting an Expo for realising a sustainable society for the future”. The forum was then concluded with greetings from Toshiko Abe, State Minister for Foreign Affairs of Japan, Masayoshi Matsumoto, President of the 2025 Japan World Expo Committee and Chairman of Kansai Economic Federation, and Hirofumi Yoshimura, Vice Chairman of the 2025 Japan World Expo Committee and Mayor of Osaka.

With six weeks until the election of the World Expo 2025 host country, the organisation of forums allows BIE Member States to exchange with candidates on the proposed themes and the questions they raise.

Japan is one of three countries bidding for the right to host World Expo 2025, the other two candidatures being from Russia (Ekaterinburg), and Azerbaijan (Baku). Member States of the BIE will elect the host country during the Organisation’s 164th General Assembly on 23 November.