The Secretary General of the Bureau International des Expositions (BIE), Dimitri S. Kerkentzes, is in Japan as part of a Technical Visit to review preparations for World Expo 2025 Osaka Kansai. The visit comes after Japan marked, on 18 July, the 1,000-day countdown to the opening of the next World Expo, which will welcome visitors between 13 April and 13 October 2025. 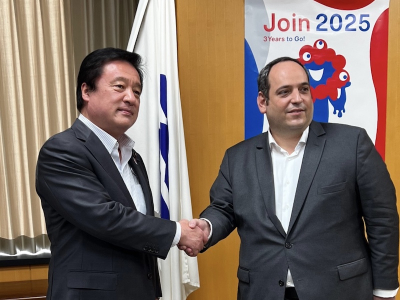 Beginning the three-day visit in Tokyo, the Secretary General today met with Kenji Wakamiya, the Minister for Expo 2025 Osaka Kansai, and Yumi Yoshikawa, Parliamentary Vice-Minister of Economy, Trade and Industry. Technical meetings have also been held with Expo Organisers, including the Chairman of the Japan Association for Expo 2025, Masakazu Tokura and the Commissioner of the Expo, Koji Haneda. 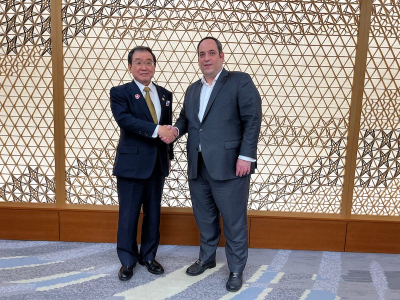 The Secretary General will travel to Osaka tomorrow, 21 July, where he will meet with the Governor of Osaka Prefecture, Hirofumi Yoshimura, and the Mayor of Osaka, Ichiro Matsui. He will also review progress on the Expo site situated on Yumeshima Island, and have further meetings with the Expo Organiser alongside the Secretary General of the Japan Association for Expo 2025, Hiroyuki Ishige.

Following the presentation of a progress report of the 170th General Assembly of the BIE on 20 June, updates will also be given on projects initiated to build engagement with the Expo and its theme, “Designing Future Society for Our Lives”, including the Team Expo initiative.

With 126 countries and eight international organisations having already confirmed their participation in Expo 2025 Osaka Kansai, preparations are set to scale up with the organisation of the first International Planning Meeting, which will be held in Osaka in October 2022. This will give all confirmed as well as interested participants the opportunity to advance further in the planning of their pavilions and favour continued coordination between the Organiser, the BIE and participating countries.

The Secretary General indicated: “Full-scale preparations are underway at all levels to make Expo 2025 Osaka Kansai a truly memorable World Expo. With the upcoming International Planning Meeting in October, all key actors will have the opportunity to intensify cooperation and move ahead in planning engaging, forward-looking and life-affirming experiences for Expo 2025”.

World Expo 2025 Osaka Kansai will take place on a 155-ha site on Yumeshima Island between 13 April and 13 October 2025. The Expo will address the achievement of the Sustainable Development Goals (SDGs) under the theme “Designing Future Society for Our Lives”, with its three subthemes being Saving Lives, Empowering Lives and Connecting Lives.