Member States of the BIE, meeting in the General Assembly via videoconference, unanimously approved the registration of Expo 2025 Osaka Kansai, on the recommendation of the Executive Committee of the BIE. The registration makes it possible for Japan to enter the implementation phase of the Expo and to invite international participants. 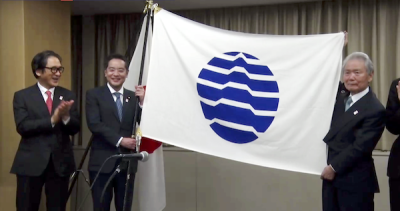 As a symbol of this next step in the process of organising Expo 2025 Osaka Kansai, Shinji Inoue, the Minister in charge of the World Expo, received the BIE flag on behalf of the Organiser.

Dimitri S. Kerkentzes, the Secretary General of the Bureau International des Expositions (BIE), declared: “World Expo 2025 will be the Expo of a new era, inviting participants and visitors alike to reflect on what they want future society to look like, and how this can be achieved. We look forward to continuing to work closely with Japan as this vision for global co-creation becomes a reality.”

Japan was elected host country of World Expo 2025 during the 164th General Assembly of the BIE in November 2018. In December 2019, it submitted to the BIE the Expo 2025 Registration Dossier, which presents a detailed plan for the implementation of the Expo, including scheduled operational dates, legislative and financial measures, the Expo site Master Plan, the conditions for international participation and legacy plans. This document was reviewed by the BIE and its Member States, leading to the Executive Committee’s recommendation for registration.

The BIE and Japan will continue to cooperate as preparations begin in earnest, with the two sides to work together in adopting Special Regulations and signing a See Agreement.

World Expo 2025 Osaka Kansai will be held between 13 April and 13 October 2025 under the theme “Designing Future Society for Our Lives”. Set to receive around 28 million visits, the Expo will take place on a 155-ha site on Yumeshima Island in the Bay of Osaka.