During the 161st General Assembly of the Bureau International des Expositions (BIE) on 14 June 2017, delegates of Member States were presented with the Expo projects by the three candidates for Specialised Expo 2022/23: Poland (Łódź), the United States (Minneapolis) and Argentina (Buenos Aires).

The General Assembly was the first opportunity for Member States to hear from all three candidates, following the closing of the candidate list on 15 December 2016. The candidates submitted their respective bid dossiers in February 2017, and BIE Enquiry Missions were carried out in March and April.

The United States was the first to take the podium, with an introduction from Ambassador Gilles Noghes, former President of the BIE General Assembly and advisor to Minnesota’s Expo project. Mark Ritchie, President of the Minnesota World’s Fair Bid Committee, then told delegates about the support of the Federal Government for the Expo project, adding that “it has drawn key support from across our country.” 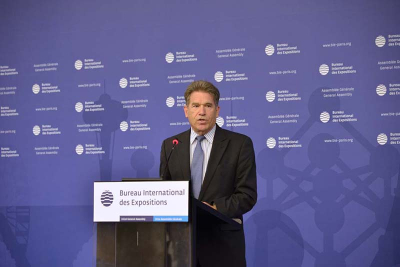 Regarding the proposed theme. “Healthy People, Healthy Planet: Health and Well Being for All”, Mr. Ritchie argued that healthcare is a top priority for humankind, and that Minnesota is an ideal location to organise the Expo due to its status and as a centre for the healthcare and medical industries. He added that the theme “recognises the inter-relationship between people and the planet, and the importance of keeping both healthy – you cannot have one without the other.” Retired Mayo Clinic physician Dr. Patricia Simmons outlined the United States’ vision for the Expo, telling delegates that the event could have a global impact by promoting healthy lifestyles and sharing knowledge on healthcare.

Argentina’s Expo project was presented by Hernán Lombardi, the Minister for Public Media and Contents System, who expressed his country’s “enthusiasm” for organising the Expo in Buenos Aires. The Minister told delegates that if Argentina is elected as host country, it would be “the first Expo in Latin America”, adding that the project has the full backing of the Government. Furthermore, as an existing science and technology park, the proposed Expo site already boasts its own infrastructure and is well-connected to the city. 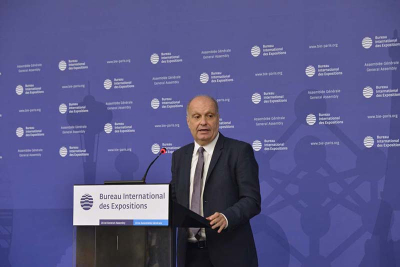 With regard to the proposed theme of the Expo, “Science, Innovation, Art and Creativity for Human Development. Creative industries in Digital Convergence”, Mr. Lombardi emphasised “the power of ideas to have a tangible impact on the lives of people and on economic development.” According to Argentina’s Expo vision, the proposed theme would allow the Expo to focus on creative industries as producers of solutions for society.

Introducing Poland’s Expo project, Paweł Lewandowski, Deputy Minister at the Ministry of Culture and National Heritage, elaborated on the proposed theme “City Re:Invented”. The Deputy Minister explained that Poland wants to share its experiences – its models and mistakes –and that: “we want the world to show us how it intends to change the cities for the people.” 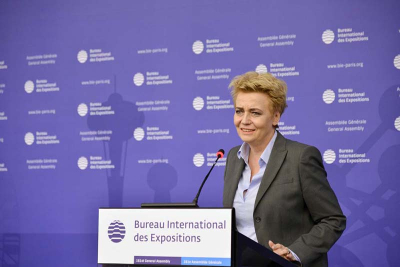 Continuing in the line of the theme, French architect and urbanist Francis Nordemann evoked the many challenges facing urban areas today, arguing that: “cities must be built upon cities… we must focus on the regeneration of urban settlements.” The Mayor of Łódź, Hanna Zdanowska, concluded Poland’s presentation, telling the General Assembly about the Łódź’s own experience and claiming that after once losing hope, revitalisation has allowed her city to “find its smile again.” The Polish delegation also gave assurances that the Expo project has the full backing of local, regional and national authorities, and enjoys wide support from the population.

The three candidates will continue to promote their respective Expo projects until the 162nd General Assembly of the BIE in November 2017, when Member States of the BIE will vote for the host country of Specialised Expo 2022/23.