France’s bid is for a World Expo in Greater Paris between 1 May and 30 October 2025 under the theme “Sharing our Knowledge, Caring for Our Planet”.

Japan’s bid is for a World Expo in Osaka between 3 May and 3 November 2025 under the theme “Designing Future Society for Our Lives”.

The Russian Federation’s bid is for a World Expo in Yekaterinburg between 2 May and 2 November 2025 under the theme “Changing the World: Inclusive Innovations – for Our Kids and Future Generations”.

Azerbaijan’s bid is for a World Expo in Baku between 10 May and 10 November 2025 under the theme “Human Capital”. 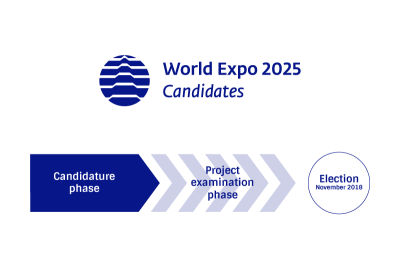 The Secretary General of the BIE, Vicente G. Loscertales, stated: “the BIE welcomes these four bids, which demonstrate a strong interest in and enthusiasm for hosting World Expos across the globe. The project evaluation phase will now allow us to find out more about the vision of each candidate and how they aim to address the universal challenges of the 21st century.”