The Organisers of Specialised Expo 2023 Buenos Aires made their first report to the General Assembly of the Bureau International des Expositions (BIE) on 13 June, following Argentina’s election as host country in November 2017. 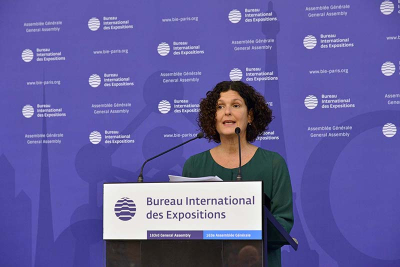 The report was presented to Member States by Gabriela Ricardes of the Ministry of the Federal System of Media and Public Content of Argentina. Highlighting the foundation work that has been done, Ms Ricardes gave an overview of the progress made in the site planning, international engagement, promotional activities, and the development of the theme: “Science, Innovation, Art and Creativity for Human Development. Creative industries in Digital Convergence.”

Preparations are being coordinated at the highest level, with the Government having opted to establish a State Agency as the organising entity before the end of 2018. Furthermore, Ms Ricardes indicated that the work has started on the recognition dossier, which is set to be submitted for approval by the BIE General Assembly in 2019.

Groundwork is also taking place for the site, which will cover a total of 65 ha in Parque del Bicentenario, on the border between the Autonomous City of Buenos Aires and the district of Vicente López. Tenders have been prepared for engineering and landscaping works, and an exhibition is currently being created to promote the Expo project on-site. This exhibition will feature a scale model of the site, updates on the advancement of preparations, and information on the BIE and Expos, as well as dedicated meeting rooms for participants and authorities.

Following recognition, an international architectural competition will be launched in consultation with Argentine architect Cesar Pelli to design the buildings for a “sustainable, efficient and lasting site”, stated Ms Ricardes. She added that separate contests are being prepared to establish Expo 2023’s brand identity in cooperation with Argentina’s universities, as well as to commission the Expo’s content.

In line with the digital focus of the Expo theme, various collaborative activities are being organised to promote the Expo and its theme, including holding a ‘Campus Party’ dedicated to programming and computer science, as well as the planned creation of ‘Channel 2023’ to promote the Expo on the new digital content platform CONT.AR.

Preparations for Expo 2023, which will be the first Expo of its kind in Latin America, are also being supported by close cooperation with international participants. After gathering mostly Asian countries for the third Seminar on Creative Industries and Digital Convergence in February 2018, a fourth edition is scheduled for later in the year, this time focused on the Arab world. Ms Ricardes added that the promotion of the Expo also takes place on an ongoing basis through bilateral meetings and visits.