Construction Project of the Century

Connecting the Expo site (later named Parque das Nações) with the southern bank of the River Tagus, the construction of the Vasco da Gama bridge aimed to improve visitor flows to the Expo, and in the long term to reinvigorate development across the region, and to cut congestion and pollution within Lisbon. Spearheaded by the international Lusoponte consortium (with Michel Virlogeux, Alain Montois, Charles Lavigne and Armando Rito as architects), the endeavour was known as Portugal’s “construction project of the century”, and cost around 900 million euros. 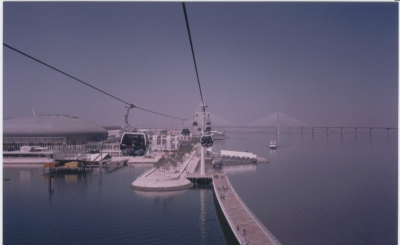 It formed part of a broad development programme accompanying the Expo, which was organised under the theme “The Oceans: a heritage for the Future.” These large-scale projects demonstrated Portugal entrance into the 21st century, while spurring urban transformation in eastern Lisbon and demonstrating the importance of a respectful relationship between humankind and the ocean.

Between innovation and ecology

Mixing modernity and protection for the environment, the bridge received the first prize for civil engineering at the Hispano-American biennial of architecture and civil engineering in Madrid in 2000. Composed of five sections spanning 17 kilometres, the 148-metre high bridge was designed to withstand winds of 250km/h and an earthquake as strong as in 1755, thanks to 95-metre deep foundations. 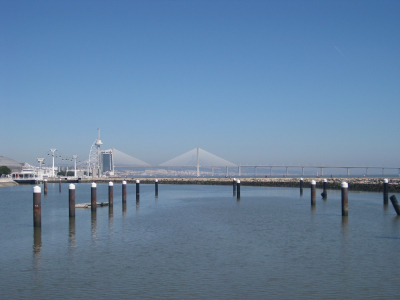 More than a symbol of Portugal’s modernisation, it also sought to demonstrate how innovation can be implemented in line with ecology. Anti-noise wells were integrated into its design, stormwater retention basins were developed to protect the Samouco salt marsh nature reserve, and the works were even interrupted for three weeks in the spring of 1995 to avoid disturbing the travel of migratory birds. These protective measures, which were somewhat of a novelty at the time, symbolised the progressive and environmentally-consious spirit that was growing in the run-up to the Expo.

Twenty years later, the Vasco da Gama bridge remains an icon of Lisbon and a symbol of the city’s modernisation. Ranking as the 27th longest bridge in the world, it will always be associated with the Expo, and as a gateway between Portugal and the international stage.