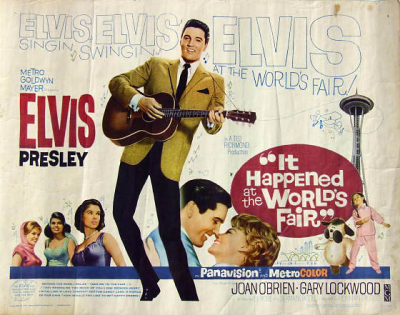 Despite the excitement caused by Elvis, the shooting went ahead. We can see emblematic components from the Expo in the film. For instance, the character of Elvis takes the Monorail. Observant people may notice that the Monorail trip is much more longer than it is in reality: indeed, it was a way to let Elvis sing his song until the end! Another scene takes place in the Space Needle's panoramic restaurant. Here again, inconsistent elements can be spotted and demonstrate that the scene was shot in studios: windows are moving instead of the landscape in the background. The footage in which Elvis is strolling in the Gayway zone, a kind of funfair within the Expo, can also be mentioned.

Expos are inspiration for the cinema: "So long at the fair", "Meet me in St Louis" with Judy Garland or "Centennial Summer" directed by Otto Preminger are all movies in which the plot takes place in World Fairs. However, Seattle's World Fair in 1962 is an exception because it is the only one to host a fiction film shooting. Clearly, the attendance of the rock-star Elvis Presley was a boon for the Expo organizers who recorded a rise in the ticket sales during the shooting period. Nevertheless, it is mostly the film's testimonial role that is important. Watching this movie takes us back to Century 21 Exposition's atmosphere and more generally to the ambiance of the 60's in the United States.