Sustainable architecture and the passive house concept are undoubtedly subjects of priority among urban planners and architects in the 21st century. But long before concerns about reducing emissions and minimising energy use, one of the first concept homes integrating sustainable design was showcased at Expo 1933 in Chicago.

Built in the backdrop of the Great Depression, the House of Tomorrow, designed by American modernist architect, George Fred Keck, was presented at the “Century of Progress Exhibition”. It was a vision of what the future could offer and is considered as a pioneer in modern housing solar design.

Keck created the ground-breaking glass curtain-wall design for the House of Tomorrow, one of several futuristic concept homes built for Expo 1933. It is said that during construction, he found the workers inside the house wearing only shirtsleeves on a frigid winter day and this increased his awareness of the power of radiant heat from the sun passing through large expanses of glass to warm the interior. 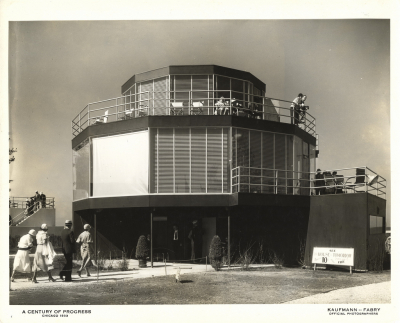 His House of Tomorrow, a retro-futuristic exhibit located in the Home and Industrial Arts Group, was a popular attraction and the most striking of eleven model homes that put a contemporary twist on traditional styles. The circular twelve-sided glass and steel model of the house defied conventions and earned the title “America’s first glass house”. It contained the latest cutting-edge appliances of the time including electrically controlled doors, the first home dishwasher and a personal aeroplane hangar.

Unfortunately, in Summer the house experienced overheating caused by the all-glass design that strained the cooling system, and had to be closed off to visits for the duration of the Expo. However, it marked the first application of passive solar principles to contemporary architecture, including solar orientation and insulated glass windows.

Lessons learned from the House of Tomorrow led to the rise of passive solar houses that used heat-absorbing and conserving materials such as large south-facing windows, to provide natural heating in winter and recycled cool air in summer. Keck used this knowledge to create the Howard Sloan Solar Park and passive solar houses in the 1940s. In subsequent decades, however, the concept of passive solar housing was relegated to the background as it was considered unaffordable for most, with its expansion only coming much later with the oil crisis of the 1970s.

Following Expo 1933, the House of Tomorrow was moved to Beverly Shores, Indiana, and it has been listed on the National Register of Historic Places. Indiana Landmarks are currently in the process of raising money to restore the building.