Century 21’s president, Joseph Gandy, a local car dealer, said he wanted a “convertible” fair. Building an Expo just to tear it down was a waste, he said. Adapting it for future public use was the goal. 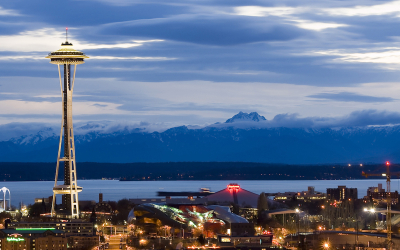 There were arguments about what that should look like. Some wanted a permanent fair and amusement zone on the 74-acre (30 ha) site. Others wanted a focus on the arts. Lincoln Center in New York and Tivoli Gardens in Copenhagen were models. The result was a publicly owned site, renamed “Seattle Center,” that combines cultural and sports facilities, tourist attractions, event and park spaces, and space for non-profit groups ranging from music festivals to public TV and radio stations.

The core of the Center consists of legacy structures from Century 21 that remain active, including the Space Needle with its observation deck and rotating restaurant, the Pacific Science Center, housed in the fair’s former U.S. Science Pavilion, Key Arena, formerly the Washington State Pavilion, and the Alweg Monorail which links the center with downtown. These are all protected by the city’s landmarks preservation law. 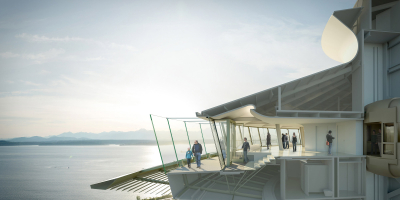 A plan to renovate and upgrade Seattle Center is currently underway with major private investment. The city is negotiating a privately funded $600-million renovation of Key Arena into a world-class sports and concert venue. The 605-foot (184-metre) Space Needle, which gets over one million visitors a year, has embarked on a major renovation and upgrade of its internal systems, restaurant and observation deck. The restaurant’s famous revolving floor, for example, will now be made of transparent glass. The entire project is privately funded and estimated to cost $100 million dollars.

Meanwhile, areas around Seattle Center are growing. Adjacent are the South Lake Union and Denny Triangle neighborhoods, home to Amazon’s main headquarters and the Bill and Melinda Gates Foundation and medical and biotech research facilities. Also nearby is Interbay, an area seeing expansion from tech companies like Expedia. During the fair, Interbay was home of a vast, little-used Expo parking lot. A light rail line is planned with a stop at Seattle Center, tying it in with a region-wide system currently under construction.

Seattle’s growth in recent years has been extraordinary, and urban development is surrounding Seattle Center as never before. Keeping it relevant and connected is more important than ever, and its value is widely recognized even by people who have no memory of Expo 1962.