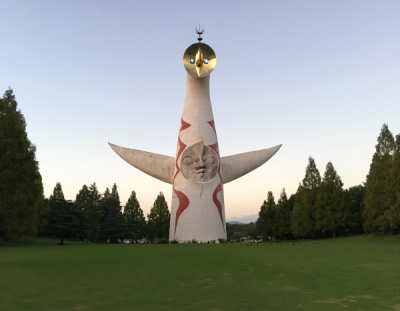 The Tower of the Sun has become a symbol of Osaka and remains the most famous icon of Expo 1970, Asia’s first World Expo. As the central structure of the Expo’s theme pavilion, it was designed to represent the infinite development of humankind and the power of life. On the outside, the Tower has three faces: the Golden Mask on top, the Face of the Sun at the front, and the Black Sun on the back. Inside, the Tower has three floors interspersed by the 41-metre high “Tree of Life”, portraying the evolution of different species of life on Earth.

The idea behind the brief reopening is to allow visitors inside the Tower before it undergoes a large-scale renovation worth 1.7 billion yen (EUR 15 million). Later in the year, the Prefecture of Osaka will start carrying out quake-resistant reinforcement works, before refurbishing the Tree of Life. It will then reopen to the public, on a permanent basis, from March 2018.

Since the closing of the Expo, the Tower of the Sun has remained in place at the centre of the Expo ’70 Commemorative Park.

{youtube}_qIueJSRbpM{/youtube}
A glimpse into the Tower of the Sun